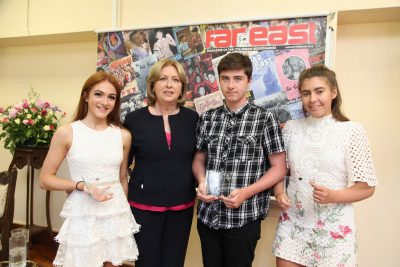 Some of the winners of the 2018 Columban Schools Journalism competition in Ireland with Dr Mary McAleese, who presented them with their prizes. Pic: John McElroy.

The Columban missionaries have appealed to young people to join the global action on climate change through its young journalists’ competition.

The call links into the COP24 climate conference in Poland, which the Columbans hope “will result in meaningful policy and action that brings the urgent change needed to set the world on a path to climate healing and justice for all”.

Students aged 15 to 18 are invited to write an article or make a video report that informs and raises important issues on the topic: ‘The Challenge of Climate Change’.

Two separate competitions are under way – one for students in Ireland and one in Britain (England, Scotland, Wales); each has two categories: writing and video.

The competition encourages students to use their journalistic writing and mobile skills to look at a topical issue that is relevant to society today and resonates with Catholic Social Teaching.

The Columbans join those faith groups, including Catholic bishops’ conferences and aid agencies around the world, missionary groups, and thousands of Catholic parishes in Poland calling for measures to keep temperature rise to below 1.5 °C .

The Missionary Society of St Columban supports campaigners from the Vatican ecology office, Climate Pilgrimage, the Global Catholic Climate Movement and CAFOD, who have lobbied the climate talks in Katowice for “the cry of the poor and the cry of the Earth” to be heard.

The objective of the journalism competition is to encourage students to use their journalistic writing and mobile skills to look at a topical issue that is relevant to Irish society today and resonates with Catholic Social Teaching.

The closing date for sending in entries to the competition is 8 February 2019.

There are some high-profile figures from the world of journalism involved as judges. Entrants from Ireland will be judged by:

The winning articles and videos will be announced in Columban media on 15 March 2018.

Columban Missionaries believe the crisis of human-induced climate change is a key moral issue for the churches.

Climate Change raises serious moral and ethical concerns about the distribution and use of our planet’s finite resources and the destruction of biodiversity and the web of life.

Young people can make a difference.

The Columbans have affirmed the witness in Katowice of Swedish teenager Greta Thunberg, who has addressed the Secretary-General of the United Nations, spoken at a panel hosted by the World Bank, and received a standing ovation at other informal gatherings for her regular vigil outside Stockholm’s parliament building calling for more action on climate change.

The 15-year-old has inspired other young people to become climate campaigners.