Home > Featured > Colm Horkan was a ‘pillar of the community’

Colm Horkan was a ‘pillar of the community’

Speaking following a remembrance service outside Henry Street Garda station in Limerick city on Sunday, Bishop Leahy said the passing of Garda Colm Horkan was a tragic reminder of the heroism and bravery of An Garda Síochána as they go out to work daily to make society safer for all of us.

Hundreds gathered in Limerick to pay their respects to Colm Horkan, including Gardaí, politicians, representatives of the support services and other community leaders, as well as the GAA, as Bishop Leahy and his Church of Ireland counterpart, Bishop Kenneth Kearon led a minute’s silence.

The 49-year-old was shot dead in Castlerea, Co Roscommon, on Wednesday night. 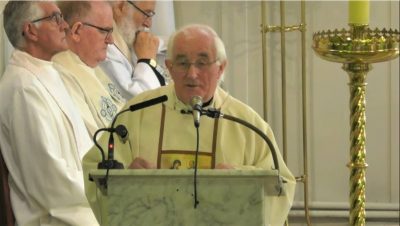 Speaking after the ceremony Dr Leahy said, “It was a moving experience. Moving, because we were recalling the awful sadness of a life taken so randomly and horrendously in the line of duty; moving, because I was struck by the obvious thought of dread that must cross every Garda’s mind: ‘such a thing could happen to me in the course of my daily duty’; moving because Colm Horkan was not just a colleague to those I was standing beside in prayer but also because Colm Horkan was such a man of community and of sport, a man of and for his people.”

“It was moving also because as Gardaí gathered in Limerick today, it made me recognise with renewed admiration and gratitude how these women and men are, just like Colm Horkan, integral in our community. They are beacons of the order and peace so essential to our social cohesion and wellbeing.”

“Gardaí help not alone to ensure society is on its best behaviour but facilitate harmony in society where we can then flourish. We are indebted to them,” the Bishop of Limerick said.

“We don’t always think of it, but there is an unwritten but real premise imprinted on their job description – be ready to give your life for others. No one has a greater love than that.” 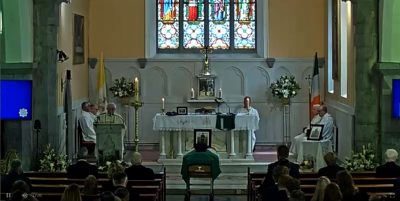 Bishop Leahy said that Limerick knows the loss of a garda in the line of duty only too well and this deepened the solidarity with all in Castlerea and Charlestown this day.

“It is twenty-four years ago this month that Detective Garda Jerry McCabe was shot dead and Detective Garda Ben O’Sullivan was seriously injured in Adare. We think of them and of their families today as well. And today, of course, we pray for Garda Colm Horkan’s soul, that he is at peace and that his watch and protection will continue from above.”

Detective Garda Colm Horkan’s Funeral Mass took place at 12 noon on Sunday in St James’ Church, Charlestown, Co Mayo, where he was baptised, received the sacraments of Communion and Confirmation, and was a Minister of the Word.

The chief celebrant was Mgr Tommy Johnston, parish priest of Charlestown, who delivered the homily.

Among symbols brought to the altar to represent his life were his Garda notebook, a GAA jersey and a Liverpool FC tie pin.

In his homily, Mgr Tommy Johnston told mourners, “The gunshots that rang out in the early hours of Wednesday morning echoed not just in the town of Castlerea but right across the country, spreading a story of tragedy and sadness and the loss of life of a Detective Garda.”

Describing Colm Horkan as “a good man, one of nature’s gentlemen”, Mgr Johnston said that as the hearse passed on its way to Charlestown, those lining the street “joined in a silent walk of welcome for a man who was dearly loved and respected in the community”.

One of the good things that have emerged from Covid-19 was the recognition of frontline workers, he said and added, “up there, very much to the fore, are our guards helping to keep the nation safe. Their work never ceases, 24/7 a guard is on duty, in the words of a prayer they ‘watch over us while we sleep and protect us while we are awake’, under the protection of their patron, Blessed Michael, the Archangel. We thank our guards for their commitment and dedication. Long may we be blessed by men and women of true dedication and service, men like Colm Horkan.”

Death, Mgr Johnston said, brings sadness and grief and loneliness and loss, and it also brings questions, questions that may take us beyond ourselves in our search for answers.

“In the case of Colm, questions have us wonder why did this tragedy happen, why did Colm die, why was this life which had so much to offer taken away so soon. I cannot answer those questions, but it seems when God takes the young he takes only the very best. Why? Has God some special task for them? Has God some special task for Colm? God’s plan has a purpose way beyond our imaginings. Into the darkness of grief, of sadness, of loss, of hurt, of anger God can bring a light of goodness, a ray of hope to open heart even fleetingly to the reality of his goodness. We pray for a ray of hope, a light of goodness to bring its blessings to those remembering in grief and sadness this good man, Colm.”

Towards the close of Mass, the Diocesan Administrator, Fr Dermot Meehan spoke words of sympathy on behalf of the people and priests of the Diocese of Achonry.

He told mourners, “Communities across our country have been shocked and saddened by the shooting of Detective Garda Colm Horkan on Wednesday night last. That sadness and shock has struck two communities in particular – Castlerea where Colm was stationed – and Charlestown, where he was a native son.”

“The sadness and sense of loss is greatest though for those to whom Colm was a son and brother, his Dad Marty, his sister Deirdre, and his brothers Aiden, Brendan, Dermot and Padraig. No words can really reach into the void in your hearts at the loss of someone who was so special to you and who was so greatly loved by you.”

In his Reflection on the life of Colm Horkan, Brendan Horkan said it was “a sad day for the Horkan family and for the community and town of Charlestown as we lay our brother to rest long before his time. Our community has lost a pillar in the true sense of the word, as we struggle to comprehend the shocking events of Wednesday when a man was cut down in the prime of his life – doing a job he loved and serving the country in the best way he knew of.”

He described his brother Colm as a gem. “He was a son and brother like no other. A wonderful uncle.”

“He had all the values that you would associate with a good and decent human being. He was kind, considerate, selfless and above all loyal to the core. He was a rock in our family – the man that was the glue that held it all together. He seldom if ever made a bad decision and lived his life by the book. It makes it all the more difficult to process the events surrounding that dark and tragic night some four days ago.”

He said his brother left a legacy of wonderful memories “which we will cherish and hold dear in our hearts forever as we say goodbye to a giant who brought such joy and happiness to us all for 49 fantastic years that he was here”.

In his address, the Garda Commissioner, Drew Harris said Colm Horgan “epitomised what all of us as members of An Garda Síochana should strive to be. He was approachable, and well known and respected in his local community and also in Castlerea where he was extremely well regarded, well liked, and where he policed for 21 of his 26 years of service.”

He said Colm Horkan’s policing service was characterised by hard work and diligence and he paid tribute to his determination and courage in the exercise of his duty to protect society.

“The manner of Colm’s death should not eclipse Colm’s life,” Commissioner Harris said.