Since 2008, 340 religion teachers have graduated from St Patrick's College which up to 1992 served as a seminary for the training of priests. 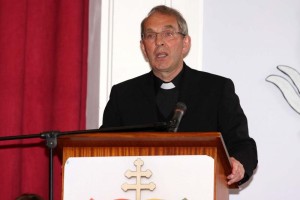 The President of St Patrick’s College Thurles, Fr Tom Fogarty, has encouraged the college’s latest batch of graduating teachers of religion to be “leaders in their profession”.

This week 47 teachers graduated from the Co Tipperary college with a BA in Education programmes.

All of the graduates, who are now fully qualified to teach their specialist subjects in post-primary schools, were conferred with degrees by the University of Limerick.

Speaking at the graduation ceremony in Thurles, Fr Fogarty revealed that since 2008, 340 religion teachers have graduated from St Patrick’s College which up until 1992 served as a seminary for the training of priests.

“Though the last few years have not been easy for the college, the future of the college is secure due to its new status as a campus of Mary Immaculate College in Limerick,” he stated.

He added, “The College has a long tradition of sending graduates around Ireland and all over the world, and now it will continue this for many years to come.”

Speaking directly to the graduates, Fr Fogarty reminded them of the words of American poet Robert Frost: “You are not just a teacher, you are an awakener”.

He urged them to remember that teaching is a much a vocation as it is a profession.

“Teachers have the potential to have a hugely positive influence on the lives of young people and he quoted the old adage ‘to the world you may be one person, but to one person you may be the world,” he said.

There were also some special awards including the presentation of awards for Excellence in Teaching, which was made to student Áine Stones.

The award recognises the demonstrated best balance of professional responsibilities including excellence in subject knowledge across all areas of study, engagement in their programmes of study, a high standard of teaching competence involvement in professional development and extra-curricular activities, and an overall sense of commitment to St Patrick’s College and to the teaching profession.