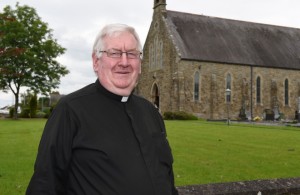 A Co Fermanagh parish priest has commended the generous gesture of his local Church of Ireland community who have undertaken to watch worshiper’s cars while Mass is taking place in a bid to deter potential thieves.

The actions of Church of Ireland rector Rev Andrew Quill, his daughter and a friend, who donned hi-viz jackets and acted as car park supervisors while Mass was taking place followed a number of car break-ins at St Mary’s Church in the parish as well as a number of local churches.

Speaking this week to the Fermanagh Herald newspaper, the parish priest of Teemore/Derrylin Fr Fintan McKiernan thanked the local Church of Ireland community and Rev Quill for their offer to mind the cars of worshipers at churches in both Teemore and Derrylin while Masses are taking place.

The offer arose after a number of cars outside both churches were broken-into last summer.

Speaking about the move Fr McKiernan said, “It was a nice gesture which I really appreciate. The onus is now on us to protect our own and it has acted as an incentive.”

“Yes we have spoken about it and there has been an excellent response within our own community for car park attendants at major liturgical events such as weddings, funerals etc.”

He continued, “The idea is that they would be a visible presence that would encourage potential thieves to move on rather than attempting to accost them or confront them. We feel that should be enough.”

Rev Quill commented, “Of course we would do this again, they are our neighbours. We were away on holidays when the robberies took place last summer and when we came back we thought that this would be a way of showing that we sympathise with those whose cars had been broken-into.”

“You would like to think that they would do the same for us. I know in Florencecourt, (where the Church of Ireland is located) people had a few car break-ins as well, so it was an opportunity to do something worthwhile.”