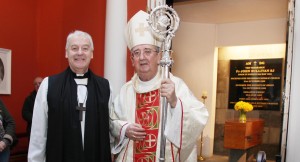 The life of Venerable John Sullivan will be honoured in a service at Christ Church Cathedral in Dublin this weekend involving the Church of Ireland and Catholic archbishops of Dublin.

Last November, Pope Francis declared Dublin-born Fr Sullivan a Venerable of the Church in recognition of his exemplary life of prayer and healing.

Fr Sullivan (1861-1933) was baptised into the Church of Ireland in St Georges’ Church in Dublin.

The son of a Lord Chancellor of Ireland, his father was a member of the Church of Ireland while his mother was a Roman Catholic.

Sunday’s service, which has been organised by Archbishop Michael Jackson, who will preach, and Dean Dermot Dunne with the assistance of Fr Conor Harper SJ, will be attended by Archbishop Diarmuid Martin, who will speak at the end of the service.

Members of staff and students from Portora Royal School and Clongowes Wood College, two schools closely associated with Fr Sullivan, will attend and the readings will be given by students of each representing the school Fr Sullivan attended as a schoolboy and the school where Fr Sullivan was based for most of his life as a Jesuit.

Members of the Jesuit community will also be in attendance.

Last February, the two archbishops joined members of the Jesuit community in Ireland for a special Mass of thanksgiving for Pope Francis’ recognition of the heroic virtues of Fr Sullivan.

In his homily for the Mass in Gardiner Street, Archbishop Martin described Fr Sullivan’s faith as the product of two traditions and said it always remained so and was enriched by that fact.

He said the Jesuit was one who in his own time understood what many decades later the Second Vatican Council would call “the universal call to holiness”.

He said this call to holiness is the fundamental vocation of every Christian, whether lay or cleric.

Referring to the presence of his Church of Ireland counterpart as well as some of Fr Sullivan’s Anglican relatives who travelled from Britain, Archbishop Martin said it was a reminder that “holiness knows no denominational boundaries”.

He continued, “Indeed in our ecumenical reflection and activity we pay too little attention to the fact that Saints can be a bridge between what is deepest and common in all our traditions.”

The Archbishop underlined that ecumenism is not the possession of theologians or activists.

His mother, Elizabeth Bailey, came from a prominent land-owning family in Passage West, Co Cork and she was Catholic.

Fr Sullivan was raised in a prosperous Protestant background in Dublin and was educated at Portora Royal School, Enniskillen.

He studied Classics at Trinity College, Dublin, where he was awarded the Gold Medal in Classics in 1885. This medal is preserved in Clongowes Wood College, Co Kildare.

The death of his father in April 1885 was a great shock to him. The inheritance he received ensured that he was very comfortable in financial terms.

A handsome man, he was an outdoors enthusiast and according to Jesuit Fr Tom Finlay, he was “the best dressed man around Dublin”.

But then in December 1896, at the age of 35, after a number of years of reflection, he decided to become a Catholic. He was received at the Jesuit Church in Farm Street, London.

He was later ordained a Jesuit and taught at Clongowes Wood College, where he spent most of the rest of his life.

His reputation for holiness spread rapidly. Within his own lifetime, many revered him as a saint for his constant prayer.

Those in need of healing flocked to see and hear him and asked his prayers – and God seemed to work through him, and many were cured.

He was always available to the sick, the poor, and anyone in need.

The call to serve God in serving those who suffered in any way was a driving force for the rest of his life. He was always caring for others, a source of comfort and peace to anyone in trouble.

He brought many people to faith in God.

Fr John Sullivan died in 1933 after a lifetime of prayer, asceticism and ministering to the sick and the poor.

In 1960, Pope John XXIII declared him Servant of God and his remains were transferred from Clongowes to St Francis Xavier’s Church in Dublin’s Gardiner Street.

www.frjohnsullivan.ie is a website dedicated to Venerable John Sullivan.