Rock band lends its backing to coffee from Haiti 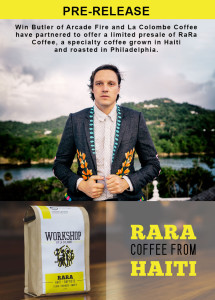 An Irishman is behind the decision of the lead singer of rock band Arcade Fire to support a new charity coffee from Haiti.

The star, Win Butler, who has featured Haiti in his music, has tweeted his delight at getting involved with the project which supports a health care charity and a self-help ‘coffee academy’ in Haiti.

“Being in the mountains of Haiti, it is hard not to think about coffee. The elevation, the sunshine, the soil, and incredible people, who have been growing the plant on tiny family plots for centuries. Haiti is buzzing with potential and possibility, and coffee can be an important part of its rebirth!” he stated.

“Really happy to share this with you, especially with all the funds going to Partners in Health, The Coffee Academy and Haiti.”

Conor Murphy, who comes from Milford in Kerry, works with speciality coffee roasters La Colombe Torrefaction, and was in touch with Win Butler about backing a new brand of coffee which has been named RaRa.

The Kerry man was present in Haiti when the terrible earthquake struck and made his way to the nearest hospital which was run by an Irish woman.

There he helped for several days bandaging the wounded and doing every day tasks until more medical help arrived. 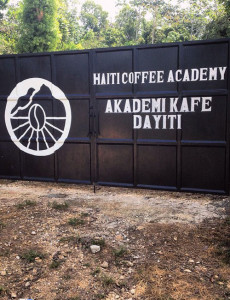 He has been working in Haiti for six years on business and humanitarian projects, many of which bring Irish, European and American companies’ know-how and practical support to Haiti business and agriculture projects which will help the country get back on its feet.

He met the band members of Arcade Fire, including Win Butler, when they were in Haiti.

Some of the band’s songs mention the country and the parents of Arcade Fire founding member Régine Chassagne were born in Haiti.

Band members have been involved in other projects in Haiti.

This coffee, from Haiti’s Baptiste region, is being sold by La Colombe, with profits going directly to the Haiti Coffee Academy which helps local farmers re-establish coffee growing on their land, and Partners in Health, a non-profit healthcare provider.

RaRa coffee was to be launched in February but it is already being pre-sold by La Colombe, which was founded by coffee entrepreneurs Todd Carmichael and Jean Philippe Iberti.

They have at the heart of their company five ethical principles of trade, including fair payment in line with the Fair Trade Organisation’s norms, and good worker conditions and wages and healthcare.

Long-term commitments are made to coffee farmers / plantations, providing a more certain future. 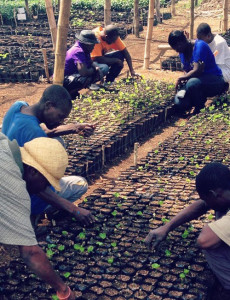 At work at the Haiti Coffee Academy

Todd Carmichael, who is something of an explorer and runs a coffee business from the USA, wanted to source coffee from Haiti which once produced 40 percent of the world’s coffee.

Having been impoverished due to political upheaval and wars, and then the earthquake Haiti had stopped exporting coffee to the USA.

He found a farm that inspired him to help Haiti improve its coffee farming methods.

Later he was approached by the Clinton Foundation to find a project to contribute to help revitalising Haiti’economy.

In August 2012, the Foundation committed $350,000 to the project, and with Conor Murphy, a business development advisor in Haiti, La Colombe leased the farm that Carmichael initially found and set up the Haiti Coffee Academy there.

In August 2013, the academy was officially registered and new Arabica seeds arrived from Brazil to be planted.