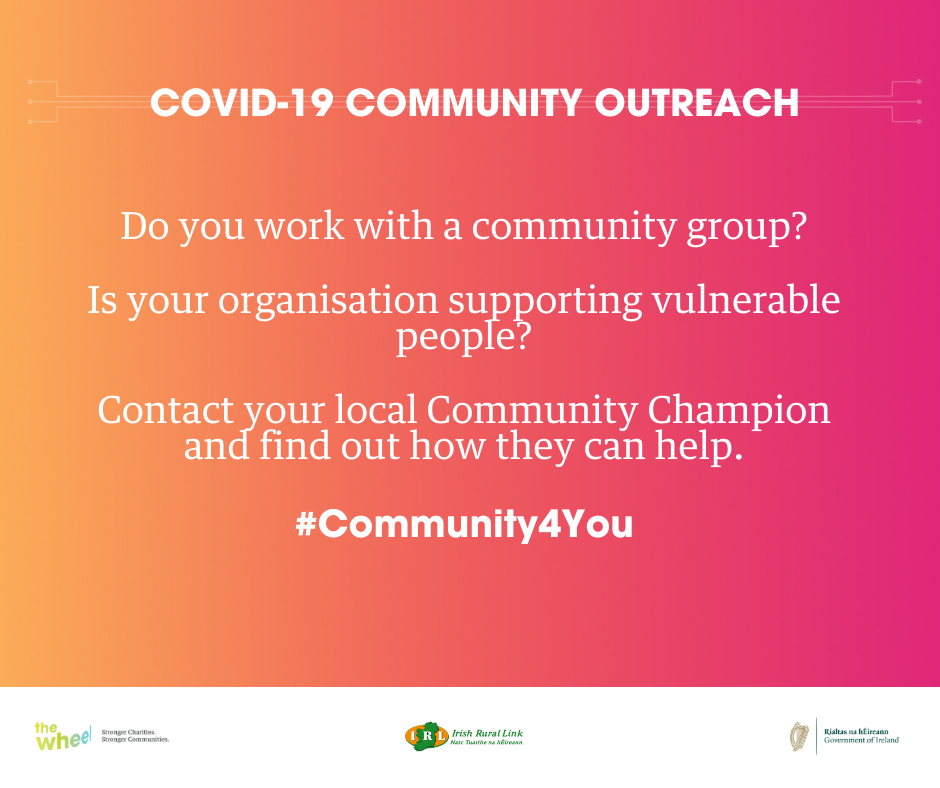 here is growing social isolation among people who have had to stay at home or cocoon because of the COVID-19 emergency measures.

This is according to the charity representative body The Wheel and the Community Call initiative (with its Community Champions who are in every county in Ireland).

“They are responding to what needs are emerging and social isolation is becoming an issue,” Gert Ackermann, spokesperson, *The Wheel, told CatholicIreland.net.

The 31 Community Champions, who have been deployed across Ireland and who liaise with charities and voluntary groups such as the St Vincent de Paul and Meals on Wheels, have stated that while the practical needs of people have been met it is now emerging that they also need social supports.

“The physical and mental well-being of ‘cocooned’ people is now emerging as a key concern, and the Champions are currently liaising with local services to ensure that these needs are addressed and that nobody is left behind,” stated Deirdre Garvey, CEO, The Wheel.

Seamus Boland, CEO, **Irish Rural Link, said that while the Community Champions are still receiving requests for practical supports like food delivery, there have been more requests for social supports with people having to cocoon for longer, “particularly among older people who find themselves isolated from their families and friends.”

For example, one Community Champion provided emotional support to a distressed man who needed support on the anniversary of his wife’s death. Another arranged mobile phone credit for isolated older people to help them stay in contact with their family and friends.

In the coming days and weeks, there will be more of a focus by the government on the physical and mental well-being of people, especially those who are cocooning. An initiative by the National Youth Council will see a new phone line to support young people who are worried about the disruption to their lives such as postponement of exams, lack of summer jobs, and other issues that arise during these times when they are away from their school and college routine and friends.

The ALONE helpline has also been very busy. The Wheel expects that extra resources be deployed to such organisations to meet people’s social needs. While the community organisations and charities are doing their best, everyone has a role to play in their own local communities, according to Gert Ackermann.

“The message is for people to get in touch with their relatives. Don’t just assume they are OK. Mind your family and your neighbours who might be isolated. The organisations … and the people on the ground like the community champions [are doing their best], but people need to mind their neighbours and the people in their own community.”

*The Wheel is Ireland’s national association of charities, community and voluntary organisations and social enterprises, with over 1,700 members.
**Irish Rural Link is the national network for community groups in disadvantaged and marginalised rural areas.