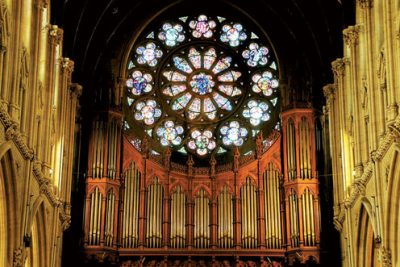 Part of the interior of St Colman’s Cathedral.

The Diocese of Cloyne and the Parish of Cobh celebrated the centenary of their glorious cathedral, St Colman’s, this weekend.

In his homily yesterday, Bishop William Crean said in its 100-year history the cathedral has never had so many visitors as it has at present, thanks to tourism and the increasing number of cruise ships visiting Cobh.

The building is an outstanding example of the French gothic style, which was very much in fashion during the 19th century, but there are very few neo-gothic buildings of this scale.

The cathedral also stands out because of its position overlooking the town and the harbour.

“The location was providential in elevation and landscape,” said Bishop Crean. “It never fails in its mission to raise our eyes to the heavens.”

A notable feature is that the cathedral’s tower contains a 49-bell carillon, one of the largest in Europe, which can be played using a keyboard within the main building.

“The whole that is Saint Colman’s Cathedral is immeasurably greater than the sum of its parts. That is evident for the many parishioners for whom this is a haven of peace and a well-spring of strength, inspiration and hope,” Bishop Crean said.

“Christian and non-Christian alike are touched deeply by crossing its threshold because this sacred space exudes a contemplative aura that enables entry to the divine.”

The cathedral was designed jointly by Irish architect George Ashlin and English architect Edward Welby Pugin, son of Augustus Welby Pugin who designed the Palace of Westminster in London. Construction began in 1868 and when Pugin died in 1875, Ashlin engaged another Irish architect, Thomas Coleman, to assist him.

The cathedral was completed in 1919 and was consecrated on 24th August that year by the then-Bishop of Cloyne Robert Browne, in the presence of archbishops Michael Logue of Armagh, John Harty of Cashel and Thomas Gilmartin of Tuam.

“When Bishop Robert Browne celebrated the Mass of Consecration in 1919 both the country and Europe had come through many years of violence and war with the ‘war to end all wars’. We wish it were so,” said Bishop Crean.

“The reality was one of great social turmoil encapsulated so poignantly in the words of WB Yeats: ‘All changed, changed utterly: A terrible beauty is born’.

“One hundred years on, in an unimaginably different Ireland, Europe and global reality prevails. In the north of Ireland, the ancient divisions have eluded resolution. In the south, a liberal secular worldview seeks to suppress the Christian narrative. Europe struggles, through the EU, to maintain the harmonisation of peoples intended to banish to history the nightmare of World War II.

“Apart from other regional conflict and tension, the Earth itself is threatened by the spectre of catastrophic extreme weather patterns due to global warming. This is without speaking of the extraordinary intrusion of technology into the tiniest detail of our daily living, both positive and negative.”

The bishop bemoaned how extreme violence no longer shocks many today, that suicide is perceived by some as acceptable and that euthanasia is seen as a positive action. In the wake of the Church abuse scandals the work of evangelisation of the young has become truly daunting.

“Yet we journey together in hope,” he said. “A hope forged from the good deeds and generosity of previous generations of religious, priests and lay people. Despite the sin and failure of a few, great goodness, kindness, mercy and compassion was shared in difficult economic circumstances for many of our people. We need to give ourselves credit for nurturing a society where humour and neighbourliness lifted the hearts through life’s trial.

“As a people of faith, we go forward in joy and hope. We will not be cowed by those who seek to denigrate faith as a form of ignorance, delusion or extremism.

“We do not walk alone. We in faith and humility desire to witness to that hope that is within and among us. We make our own today the words of the Psalmist: ‘May your love be upon us, O Lord as we place all our hope in you’.”