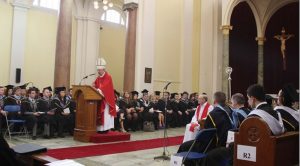 Archbishop Martin with Mater Dei graduates in 2012 at Mater Dei Institute of Education.

The Church’s response to the radical change in society has to be more than just “tweaking” the Archbishop of Dublin has said.

In the past it invested in solid buildings which were the way to train people, but today buildings have “soft walls and are flexible”, he said.

Archbishop Martin was speaking at a mass marking the closure of the Mater Dei Institute in Drumcondra on Thursday.

Founded by Archbishop John Charles McQuaid, Mater Dei has trained RE teachers for Catholic Secondary schools since 1966. Since 1999 it has been a linked college with Dublin City University (DCU).

“There are those who say that all this is the end of an era and a sign of a less optimistic, enthusiastic and forward-looking presence of the Church in Irish society,” Archbishop Martin told the congregation in the Mater Dei College chapel on Wednesday.

It is the end of an era, he agreed “but not in the sense of a definitive end to the presence of Christian faith as a constitutive part of Irish society.”

The institutions of one hundred and fifty years ago have to be replaced and renewed to be effective and incisive in the world of the 21st Century, said Archbishop Martin.

The radical change taking place in Irish culture could not be met with mere “tweaking”.

We need new institutions to address a new era, he said.

Questioned on RTE radio as to whether the “new institutions” included a new seminary, given the controversy currently surrounding the National seminary at Maynooth, Archbishop Martin, who is one of its Trustees, said seminaries would remain “but in a different way and much of the preparation of a priest will take place outside the walls of a seminary with the realities of the life in which people live.”

Asked if he had confidence in the teaching at Maynooth, Dr Martin said the faculty was a “good faculty” and he had “never criticised” its teaching, but added that he believed its theological faculty needed to be strengthened.

At the Mass on Wednesday, Archbishop Martin announced that Mater Dei and St Patrick’s College would become part of the new Faculty of Education in DCU which will include Institutes of Catholic and Church of Ireland education.

“For the first time candidates who aspire to teach in the various traditions of denominational education will be trained together and alongside those who aspire to a more secular vision,” he said.

The Archbishop of Dublin also announced the establishment in Newman’s University Church in St Stephen’s Green of a new Centre for Faith and Dialogue in society led by Notre Dame University which will open in September to help provide “a new and vigorous formation of lay Catholics within the Irish Church, one which witnesses to the bonds between faith and life in a pluralist culture,” he said.

The Archbishop said vocations to the priesthood would spring-up from within mature lay faith communities.

“The training of future priests belongs closer to the faith communities which they will serve and which will continue to nourish them along their path,” he added.