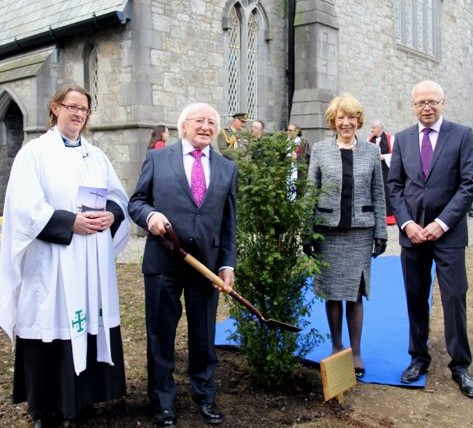 President Michael D Higgins led commemorations on Wednesday marking the millennial anniversary of the landmark Battle of Clontarf which took place on 23 April 1014.

Ahead of the faith gathering, the theme of which was peace and reconciliation, President Higgins planted native Irish yew tree in the grounds of the Anglican church.

A member of the Dublin parish, John Patten, explained that the yew was chosen for its longevity.

As some older yews in Ireland have been alive for an estimated 2,000 years, he said they hoped that the tree planted by the President would be around for the celebrations marking the Battle of Clontarf’s second millennium.

The original parish church of St John the Baptist was built on ground which is now the cemetery and that church dated back to 600AD. It would therefore have witnessed the events of 1014, John Patten noted.

In his address, the Catholic auxiliary bishop of Dublin, Bishop Eamonn Walsh, told the congregation that the brutality of the Battle of Clontarf was an opportunity to reflect on the need for peaceful resolution to conflict.

Recalling some of the more graphic violence, Bishop Walsh said the battle was not a “master class in conflict resolution”. Over half the population of Dublin at the time died in it.

“They were tough times, brutal warfare and not for the faint-hearted,” Bishop Walsh stated.

Yet it was also a landmark victory, which secured the High Kingship of Ireland and put the foreign invaders to flight.

The Bishop pondered how God was feeling “looking on as all those ‘created in his own image and likeness’ butchered each other on Good Friday, the memorial day of his Son’s crucifixion. 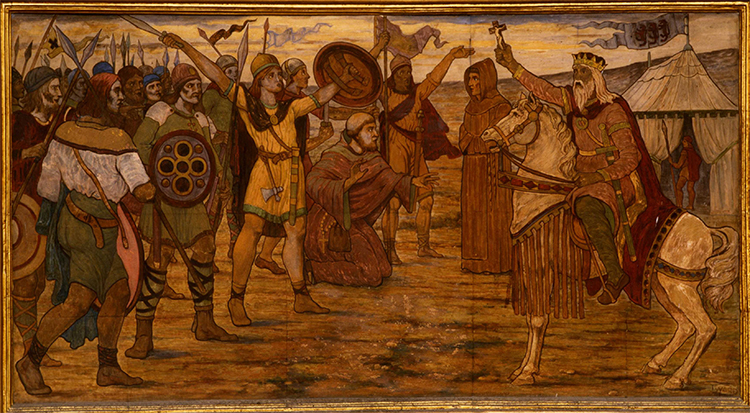 “A thousand years on, little has changed” Bishop Walsh suggested, and referred to the two World Wars and the genocide in Rwanda which occurred twenty years ago this year.

“God took a huge risk giving us free will. Yet it is the only way it can be. The paths of conflict resolution, the way of peace and reconciliation are in our hands”, he said.

He said the millennial commemoration nudges us to reflect on the importance of fraternity among peoples and a “fixing of our compass earnestly in the direction of Christian unity.”

“All of us are tasked with being custodians and developers of this Universe, all of us as equal members of the human family,” Dr Walsh said.

The Bishop also hit out at power, greed and unbridled individualism which today threaten fraternity.

Speaking after the service, the Church of Ireland Archbishop of Dublin, Dr Michael Jackson, said the service was an indication of the “tremendous public commitment now to peace and reconciliation.”

However, he acknowledged that commemorating a battle was “a dilemma.”

“It is something that the Christian Churches have struggled with. War is reality and people do it for good reasons and for bad reasons. Part of what we heard today was that we set our celebration in the context of the need for God’s grace and the need for reconciliation, forgiveness and redemption.”

The infamous battle saw Brian Boru’s forces defeat those of the King of Leinster, Mael Morda Mac Murchada, who was assisted by Viking mercenaries. However, Boru himself did not survive, as he was beheaded by the fleeing mercenary, Brodar.