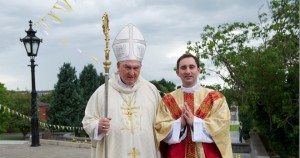 St Macartan’s Cathedral in Monaghan was packed last Sunday for the celebration of the first priestly ordination in the Diocese of Clogher in eleven years.

Fr Raymond Donnelly was ordained to the priesthood by the Bishop of Clogher, Most Rev Liam MacDaid.

The ceremony was attended by Fr Raymond’s family and friends, students from the Irish College in Rome, as well as Clogher’s Bishop Emeritus Joseph Duffy and a large number of priests from the diocese.

Diocesan organisations, pastoral and apostolic groups from the parishes of the diocese were also represented.

The diocese, which includes Co Monaghan, most of Fermanagh, and parts of Tyrone and Donegal, has seen a resurgence in vocations to the priesthood in recent years.

There are currently six men in formation at St Patrick’s College Maynooth and the Irish College in Rome.

Thirty-four year-old Fr Raymond is a native of Monaghan town and is one of five sons of Colm and Maureen Donnelly.

Having taught for six years in Our Lady’s Secondary School, Castleblayney, Raymond began studies for the priesthood in 2008 at the Pontifical Irish College in Rome. He was ordained deacon in Rome by Bishop MacDaid on 9 April 2012.

During his time of formation, Fr Raymond undertook several pastoral placements in the diocese, including work in St Michael’s Parish, Enniskillen, St Patrick’s Purgatory, Lough Derg as well as his native parish of Monaghan.

While in Rome, he studied for an STB in Theology and an STL in Dogmatic Theology.

In his homily, Bishop MacDaid told the congregation, “It is a day to remember with gratitude for all of us. Every ordination brings joy and strength to the Christian community, knowing that the Word of God will be brought to us and that we will continue to have the Sacraments to nourish, inspire and guide us on our pilgrim journey through life”.

Highlighting the significance of the occasion, Bishop MacDaid continued, “Today is an occasion to glorify God for the fullness of life he has given us in the Incarnation of his son. We are gathered to acknowledge and affirm a young man’s sacrifice of his own pleasure and ambition in offering his life in the service of others and in the spread of God’s kingdom.”

Referring to the time lapse since the last ordination, he said that he hoped the ordination would be “an inspiring day for the five clerical students who are following in his footsteps, and for the sixth young man who will join them in September and, hopefully, for the many others who may be hearing faintly the voice of God calling, inviting them to take up the same challenge.”

Speaking directly to Raymond, the Bishop thanked him for his generosity in offering his life in the service of God’s people and assured him of the support of the Bishop, priests and people.

“Give with joy and you will receive in even greater measure. Let the Word of God be your treasure and the teaching of the Church your guide… May the Lord bless and make fruitful your ministry.”

The newly-ordained Fr Donnelly celebrated his First Mass at St Joseph’s Church, Park Street, Monaghan on Monday, after which he gave his first blessing to those present.

Fr Raymond will take up an appointment in the diocese at the beginning of September.