Pray with the Pope via new ‘Click to Pray’ app 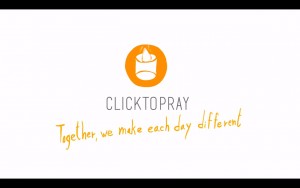 The Pope’s Worldwide Prayer Network (Apostleship of Prayer) on Friday launched a new app which enables people around the world to join in prayer for the intentions of Pope Francis.

The ‘Click To Pray’ app presents something different 365 days of the year and allows people virtually from anywhere in the world to unite their prayers with the Pope’s easily and quickly every day.

Users can join millions around the world from different cultures and languages in praying for the universal challenges confronting humanity.

According to Fr Frédéric Fornos, SJ, International Director of the Pope’s Worldwide Prayer Network (Apostleship of Prayer), “Click To Pray invites men and women around the world to accompany Pope Francis in a new digital way, with the hope that the continents unite in prayer for the great challenges of the world and the mission of the Church as expressed in the Pope’s intentions.”

Developed, designed and distributed by La Machi, a communication agency promoting good causes, the Click To Pray app is available in English, Spanish, Portuguese, and French in both Android and iOS formats.

A first version of Click To Pray launched in 2014 in Portugal at the initiative of that country’s office of the Apostleship of Prayer.

That version, which immediately created a community of 87,000 people in 138 countries.

Click to Pray sends users notifications on the World Day of Prayer (first Friday of each month) and proposes a rhythm of prayer three times a day: morning, daytime, and evening.

With this release, Pope Francis seeks to promote the spirit of dialogue and interaction, so that each user of Click To Pray can join thousands of people praying for his and their own intentions.

More than 35 million people make up the Pope’s Worldwide Prayer Network which has national offices around the world to help people everywhere make a global impact such as the Click to Pray app enables.

In the US, the Pope’s Worldwide Prayer Network promotes a daily offering prayer, an evening review, and oneness with the Heart of Christ.

“Being part of a communication vehicle like Click To Pray allows us to achieve greater solidarity with Christians everywhere, with whom we join in prayer for the world, the Church, and one another,” said Fr James Kubicki, SJ, National Director of the US Apostleship of Prayer.

“We don’t know how,” Fr Kubicki continued, “but we believe Jesus when he said that by uniting in prayer we can bring about much good in the world. ‘For with God all things are possible,’ Jesus said.”

The motto of the Click To Pray app is “Together, we make a difference every day.”

The vision of the Apostleship of Prayer network is to be apostles in daily life through a spiritual path called ‘The Way of the Heart’ which transforms our way of serving Christ’s mission.

The Apostleship of Prayer was founded in 1844, and is present in over 100 countries, and is made up of over 35 million people, including its youth branch, the Eucharistic Youth Movement. For more information: http://www.apmej.org.

Founded in 2012, La Machi, with offices in Barcelona, Buenos Aires, and Rome, is a creative agency specialising in communication which promotes good causes.

Its mission is to help companies, NGOs, and religious institutions to communicate and publicise their works.

The agency has been recognized as a ‘Friend of the World Project’ (RIIAL) and won the Mercury Prize for best international SME marketing in 2015 awarded by the Argentina Association of Marketing. For more information: http://www.lamachi.com