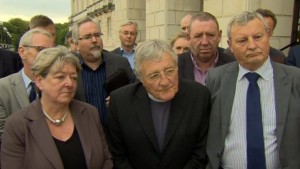 A prominent protestant clergyman in Northern Ireland, who oversaw the IRA’s decommissioning of its weapons, has warned that “people in the shadows” could exploit a vacuum created by the collapse of power-sharing.

The Rev Harold Good, a former president of the Methodist Church, along with the late Redemptorist Fr Alec Reid, saw the IRA destroy its guns in 2005.

It was a crucial milestone in the peace process which ended years of conflict.

Rev Good visited Stormont last week and said years of work could be lost if the devolved administration imploded.

“Many of us are fearful that all we have put into this and all that other people have worked for could get lost just too speedily, too swiftly. How difficult it would be to get it back. Let’s remember that and let’s think also about the vacuum that would be left, we could be back to square one,” he warned.

Rev Good also suggested that “There are people out there waiting in the shadows, across our community, who would take advantage and exploit this opportunity for another agenda.”

Canadian General John de Chastelain led an international independent commission on decommissioning, which oversaw the destruction of the paramilitary weapons.

The move marked a crucial point in the peace process, coming after a 30-year conflict during in which the IRA killed nearly 2,000 people.

Rev Good joined a group of church, voluntary and trade union figures at Stormont to highlight the peril if that devolution settlement came apart.

“We cannot afford to have our institutions collapse. We are representing our young people, the folks with whom we live and work, and demanding that we do not lose our institutions for which they and all of us have worked so hard,” the Methodist leader said.

Separately, Bishop Kevin Doran of Elphin asked parishioners at the weekend to pray with him for wisdom and constructive political action on the part of all elected representatives in Northern Ireland.

He said they were praying that the present crisis in the democratic process may be resolved.

“This is not just a ‘Northern Ireland problem’. This island is our common home and what hurts one of us undermines us all. Lord Jesus, prince of peace, guide your people,” Bishop Kevin implored.