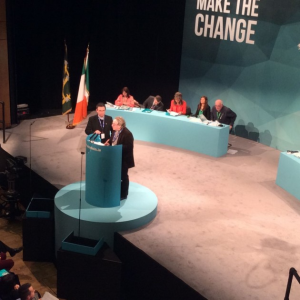 A Catholic priest and Presbyterian minister took the podium together at the Sinn Féin Ard Fheis.

Fr Martin Magill (Sacred Heart Parish) and Rev Steve Stockman (Fitzroy Presbyterian) stated ahead of the Ard Fheis that they had accepted the invitation “after prayerful consideration” and pointed to their deep-rooted belief that peace-building is a “biblical mandate” that comes from Jesus Himself, who calls all Christians to be reconcilers.

Rev Steve Stockman wrote in his blog that three years ago he was invited to a Sinn Fein Ard Fheis.

As part of the ongoing peace building process, he wanted to reach across all boundaries, however he was frightened of how people might react.

This time he felt that attending was an opportunity to “redeem the weakness” of three years ago.

Both he and Fr Magill spoke on the theme:  Shaping The Future Through Reconciliation.

Rev Stockman began with the greeting “Dia Daoibh” and thanked those present for inviting a Presbyterian from Ballymena, as he described himself.

“Wounds are deep. Pain is raw,” he said as he remembered his Assistant Minister whose father was shot dead when he was two, and a former intern who never met his father who was blown up in a bomb.

“As we speak we are aware that most of us here tonight are dealing with our own wounds and pain. We pray that all of us find healing. Yes, reconciliation is an uncomfortable conversation – thank you for inviting us in – We believe it is a God-honouring conversation and one we desperately need to have,” he said.

He said that Sinn Féin were taking risks in reconciliation, in inviting him and Fr Magill and other Church colleagues to attend and Loyalist bands as well. 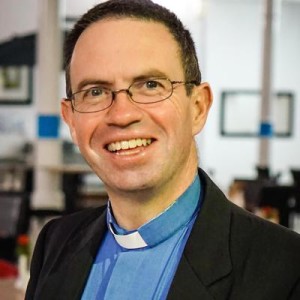 Fr Magill began quoting the words of Jesus: “If you find you have something against your brother or sister, leave your offering before the altar, go and be reconciled.”

“We want to live out the challenge of those words. We want to play our part in helping people to be reconciled by overcoming the fear, distrust and hatred which still remain from our troubled past,” he added.

He said that in Northern Ireland people have come a long way but still have far to go. This is evidenced in current issues such as deciding how to use the Maze/Long Kesh site or to name a play park in Newry.

He offered his support to all politicians as they seek to find agreement on how to reconcile the “differing narratives of the past.”

Fr Magill said that if reconciliation is to shape that future, then it cannot be left to politicians or to one party alone.

“We are passionate that the Churches have an important role to play in the work of reconciliation. The words of Jesus in the Beatitudes encourage us: ‘Blessed are the peacemakers’.”

He said that for his part this meant sitting down with young loyalist bandsmen, listening to them talk about their band practices, the pride they take in the uniforms they wear, their love of regimental music and military marches – way outside his comfort zones.

He has also worshiped in Protestant churches and found it enriching but also challenging because he had to let go of prejudices that he has had for almost 50 years.

“For us in Northern Ireland as we get to know one another, build new relationships and rebuild old ones we might finally reach a place on the road where we humanise instead of demonise one another,” he said. 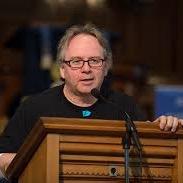 Rev Stockman spoke about how as a Presbyterian Chaplain at Queens he took hundreds of students to South Africa over a ten-year period to build houses on townships.

“Nelson Mandela wasn’t happy just getting out of prison, just getting a vote or even just becoming President. He wanted more. More than a political peace, Mandela was determined to build a societal peace. He spent the rest of his life creating a rainbow nation that included everyone,” he said.

He concluded urging those present to “let the uncomfortable conversations continue” and to believe they can make the change, and do it together.

Fr Magill and Rev Stockman are founders of Belfast’s Four Corners Festival held in January/February 2015 to inspire people from across the city to transform it for the peace and prosperity of all.