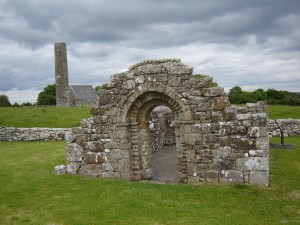 At a ceremony in Mountshannon, the local authority confirmed it has acquired 41 acres on the island which, together with the 2 acres already in the ownership of the Office of Public Works (OPW), now means that the entire island is, for the first time, in public ownership.

The council also announced its intention to procure professional experts to prepare a Visitor Management and Tourism Development Plan for Holy Island.

This will provide a framework, in consultation with key stakeholders, for tourism development and visitor management of the Island, while also ensuring the cultural heritage and natural assets that contribute to the Island’s uniqueness are maintained and protected.

Now uninhabited, it was once a monastic settlement. Still used as a burial ground, the ruins and buildings standing on Holy Island date back as far as the 7th century when the monastic site was established by St Caimin.

Buildings on the island include a 24-metre high Round Tower, an Oratory, and a number of churches.

St Caimin’s Church is the only roofed building, part of it dating back to the 10th century. In the 12th century a Romanesque doorway was created in the western wall. In 1879 it was reconstructed as an arch of three orders.

In 1978, that doorway was taken down and was rebuilt in 1981 as an arch of four rather than three orders. Inside the church there are crosses, monuments, gravestones and a sundial.

Speaking to CatholicIreland.net, Cllr John Crowe, the Cathaoirleach of Clare County Council said, “Holy Island is one of the most important historical and ecclesiastical sites in Ireland, and it has important links to Brian Ború.”

“It is on the UNESCO world heritage site tentative list for Ireland as an early medieval monastic site along with Clonmacnoise, Durrow, Glendalough, Kells and Monasterboice.”

“It is the jewel in the crown for East Clare and I am delighted that Clare County Council has now concluded the purchase of 41 acres on the Island so that the Island is now in public ownership,” he said.

The purchase of the Island has been funded by Clare County Council from its own resources and additional funding towards the production of a Visitor Management and Tourism Development Plan has been provided by the Lough Derg Marketing and Strategy Group.

“Clare County Council has invested significantly in tourism product at the Cliffs of Moher, the Burren, Doolin, Loop Head and now we have a tremendous opportunity to make available one of the most important monastic sites in Ireland to a wider audience,” the Chief Executive of Clare County Council, Tom Coughlan told CatholicIreland.net.

“We fully understand and appreciate the significance of this site and the necessity to ensure that any proposals are sensitive to the natural environment and cultural heritage of the site.”

“We look forward to working with all stakeholders as we progress the development of the Visitor Management and Tourism Development Plan,” he added.