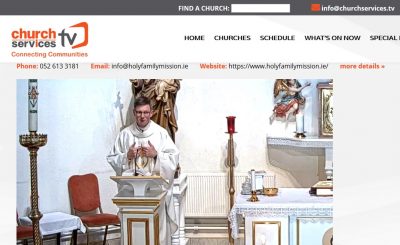 ChurchServicesTV’s streaming of Mass on Sunday from the Holy Family Mission, Glencomeragh in Co Tipperary for RTÉ News Now has been hailed by Tony Bolger, director of CSTV, as “a success and a historic moment” for the digital media company.

Due to the Covid-19 lockdown, RTÉ opted to collaborate with ChurchServicesTV in streaming the liturgy and broadcast it on television rather than send an RTÉ crew or an outside production company.

Speaking to CatholicIreland.net, Roger Childs, Senior Production Executive and Commissioning Editor, Religious Content at RTÉ, explained that Sunday’s broadcast was not the first webstreamed Mass to be broadcast in Ireland.

“The first of those I remember was Gerry Ryan’s funeral ten years ago, but there may have been others even earlier,” he said.

Roger Childs explained that since 19th March, RTÉ News Now has been broadcasting Mass every weekday, aware that, at a time when many people – especially the cocooning elderly, hospitalised and imprisoned – feel the greatest need for company, comfort and inspiration, they are cut off from their families and faith communities.

“It has been RTÉ’s privilege to say to those people, “We’re with you in spirit”, he said.

Initially, as the national broadcaster adapted to the Covid-19 restrictions, it was not possible to extend streamed Masses to weekends, because, “with so many RTÉ staff working remotely or else self-isolating, home-schooling or even sick, we did not have enough technicians to upload these webstreams for TV use at weekends,” he explained.

“However, I was aware that many people have felt the absence of Mass on the days when RTÉ One and RTÉ Radio 1 Extra/LW252 broadcasts a Service, and vice versa, so I asked Churchservices.TV if they could help us develop a workflow – a method of file delivery – that would enable us to fill the breach with a Sunday afternoon broadcast on RTÉ News Now, when we could be fairly confident that it wouldn’t be bumped by an HSE press briefing or similar.”

“They were kind enough to oblige yesterday with a Mass from the Holy Family Mission in Glencomeragh.”

Online and TV audiences for these Masses and religious services have continued to grow over the weeks of the lockdown.

Audience research in March suggested that up to 65,000 per day were watching RTÉ’s daily Mass broadcasts and this figure would usually be higher for Sunday Mass on RTÉ One.

Roger Childs explained that, “Commensurately, viewing figures for Sunday Worship on RTÉ One have jumped dramatically: 183,500 (33% of the available TV audience) watched Mass last week, a Youth Mass celebrated by Bishop Kevin Doran with a small group of teens from Roscommon town; and our Easter audiences peaked at 248,200 (36.6% share) on Good Friday for the Solemn Liturgy from Christ the King Cathedral, Mullingar.”

It is a place of mission and evangelisation for young people in the Diocese of Waterford and Lismore. It opened in December 2016.

Glencomeragh House was formerly owned and run by the Rosminians.

But when the order left in 2016, a core group behind the Holy Family Mission project transformed the premises into a residential community for young people where the primary focus is academic and practical formation in the Catholic faith.

The project is the brainchild of Fr Patrick Cahill, Maura Garrihy and Patrick Reynolds. The founders have a broad range of experience in young ministry and evangelisation and they say they want to help young people become effective, modern day disciples of Jesus Christ.

Fr Cahill is from Thurles, Co Tipperary and is a priest of the Work of Jesus the High Priest. He has been ministering in Ireland and Italy since his ordination in 2009.

He has been involved in Youth 2000 for over a decade and was its National Spiritual Advisor from 2016 to 2019.

In his homily on Sunday, Fr Cahill stressed that people can often look for joy in the wrong places. “We can be doing something that we think is fantastic but it is actually leading us away from true joy.”

“There can be this manic, frantic search for joy and fulfilment which we look to fulfil in all the wrong places.”

He said that though the aim is to satisfy our hunger with authentic love, sometimes people end up looking to the next phone, or the next fashion item and so “rarely aim to find fulfilment in God”.

In this time of lockdown during the pandemic, Fr Cahill said it was worth bearing in mind the third commandment, ‘keep holy the Sabbath day’.

“For one day in the week God has planned it that we wouldn’t do anything else, that we would avoid all unnecessary work and spend time with our heavenly father and with our earthly families. One-seventh of our week should actually be quiet time with God and time with the family.”

“It is an occasion to put God back at the centre,” he suggested.