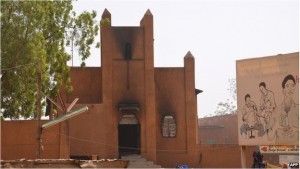 One of the churches burnt down in Niger. Pic courtesy BBC.com

Up to six churches were torched on Saturday in the African state of Niger in Muslim protests over the decision by the magazine Charlie Hebdo to feature a cartoon of the founder of Islam Muhammad on the cover of its first issue since the Paris attacks last week.

Many Muslims see any depiction of Islam’s prophet as offensive.

Demonstrators in Niamey set fire to churches and looted shops a day after five people were killed in the majority Muslim country in protests over the cartoon.

Though calm was restored on Saturday afternoon, there are concerns for Sunday after Islamic associations called for another protest that day.

According to Reuters, demonstrations were also reported in regional towns, including Maradi, 600km east of Niamey, where two churches were burned.

Another church and a residence of the foreign minister were burned in the eastern town of Goure.

Niger’s 17 million people are almost all Muslims, though its government remains secular.

Commentators have suggested that thanks to the influence of moderate Sufi brotherhoods, Niger has avoided the armed Islamist uprisings that have shaken neighbouring Nigeria and Mali.

But in recent years there have been a growing number of protests by hardline Muslim associations over social issues.

The French embassy has warned its citizens not to go out on the streets.

Eight of them were journalists. Subsequent attacks in Paris killed another five people, four at a Jewish supermarket.

The death toll from Friday’s clashes in Niger’s second largest city of Zinder rose to five after emergency services discovered a burned body inside a catholic church.

Churches were burned, Christian homes looted and the French cultural centre attacked during the violence in Zinder on Friday, residents said.

A police officer and three civilians had already been confirmed killed in the demonstrations, police sources said.

Peaceful marches took place after Friday prayers in the capital cities of other West African countries, Mali, Senegal and Mauritania, and in Algeria in North Africa, all former French colonies. In Algiers, several police were injured in clashes with protesters.

Protests against the magazine were also seen on Friday in Pakistan, where protests turned violent in Karachi, the Sudanese capital of Khartoum and the Algerian capital, Algiers.

People in Somalia took to the streets on Saturday.

In Somalia, protesters held placards reading, “I am Muslim and I love my Prophet”

In Niger, a former French colony, hundreds of demonstrators gathered at Niamey’s grand mosque, shouting “God is Great” in Arabic.