“A Church without women in its leadership is a weaker Church” 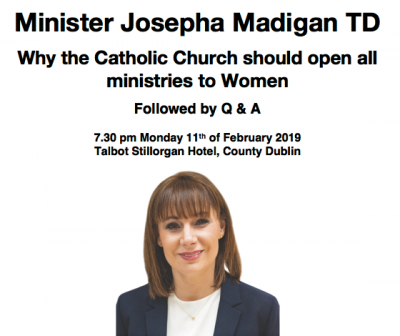 “There are so many women in the Church who are leaders in waiting,” a rueful Arts and Culture Minister Josepha Madigan said on Monday night as she tackled the topic of why the Catholic Church should open all ministries to women.

The Fine Gael politician delivered her talk at the Talbot Hotel in Stillorgan after pro-life campaigners threatened protests if the Mercy Sisters allowed the address to go ahead at their International Centre on Baggot Street in Dublin.

The protestors said they were opposed to Minister Madigan’s support for abortion and her spearheading of Fine Gael’s campaign to repeal the Eighth Amendment.

CatholicIreland.net understands that a number of people protested about the talk to the Talbot Hotel ahead of the Minister’s presentation and a small group of protesters brandished placards on Monday evening and called for the Minister to be excommunicated over her position on abortion and women priests.

In her address, ‘A Community of Faith: Why the Catholic Church should open all ministries to women’, the Minister for Culture, Heritage and the Gaeltacht said the role of women in the priesthood is still considered a taboo topic at the highest levels of the Catholic Church.

“How long will it take for the Catholic Church to realise that their prohibition on women priests is not just, at best, brazen discrimination but at worst could lead to the slow death of their beloved Church in its entirety?” she challenged.

She also underlined that women are holding the Church together, and she cited the 2017 Vatican Pontifical Yearbook’s statistics. According to these, women comprise a majority – 56 per cent – of all consecrated people within the Church.

“So, let’s be clear, women are in the Church. Women work for the Church. They simply face a glass ceiling that bars them from being able to apply for, or be appointed to, important leadership positions. And glass ceilings are being broken in many sectors, politics, science, so why not in the Church?”

She told the members of We Are Church Ireland, “You can walk into any parish in this country and around the world – more often than not, it is women who are holding parishes together, doing the lion’s share of the work.”

She warned that a Church that discriminates against hearing 50 per cent of its wisdom is not as smart as it could be. “That is a disservice to Catholic men and women around the world. It is not a Church that is truly representative of the world we live in.”

According to the Minister, who was speaking in a personal capacity as a Catholic who is active in her local parish church, “It is not that women need Church leadership positions; it is that Church leadership needs women!”

While many areas of life are opening up to women, the role of women in the Church has been relegated by an exclusively male clergy.

“This form of clericalism is hurting all of us. We have strayed from the pastoral approach that guided our early church, and that still guides many of our female and male members in the global south where the Church is growing.”

She appealed to her listeners, “I want you to imagine a Church fit for our daughters, as well as our sons.”

As to whether women should be deacons; or on committees at the Vatican where they have been excluded or under represented; or be present, speaking and voting at a synod; or priests; or properly recognised for holding parish life and religious family and community life together, Josepha Madigan, responded, “I firmly believe that the answer is yes.

“I am a daughter, I am a wife, I am a mother. I am a woman. And I can tell you now that if we want a Church that is fit for our daughters, hearts and minds need to change. Women are waiting. Women are watching. But if we want our daughters to be there in future generations, we need to open the Church fully to them, as fully equal members in the community of faith.”