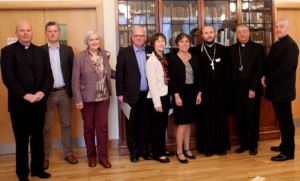 She was in Ireland to give a public lecture at Trinity College as well as address a meeting of members of the Dublin Council of Churches.

During both of these appointments she explored the dual legacy of the Reformation era, how it changed Europe and how we perceive it today.

2017 will mark the 500th anniversary of Martin Luther’s 95 theses that started the Reformation in Europe.

The annual Churches’ Forum Day took place in the Quaker House in Rathfarnham and focused on the question ‘Church Today: In Need of Renewal – Reform or Re–formation?’

The morning reflected on the ongoing legacy of the Reformation in the context of the 21st century.

Other speakers who addressed the gathering included the Church of Ireland Archbishop of Dublin, the Most Revd Dr Michael Jackson; the former Clerk of Assembly of the Presbyterian Church in Ireland and President of the Irish Council of Churches, the Revd Dr Donald Watts; Fr Kieran McDermott, PP Dundrum and Episcopal Vicar of Ecumenism and Evangelisation with the Archdiocese of Dublin; Ms Rachel Bewley–Bateman of the Religious Society of Friends; and Archpriest Mikhail Nasonov of the Russian Orthodox Church.

The event was chaired by Mrs Gillian Kingston of the Methodist Church in Ireland. Archbishop Diarmuid Martin of Dublin also attended the conference.

Dr Graeme Murdock, Reformation historian at the Centre for Early Modern History at Trinity College gave an introductory historical presentation explaining how the Reformation brought about a dramatic transformation of Europe into a pluralist space, which also resulted in intra–Christian rivalry. 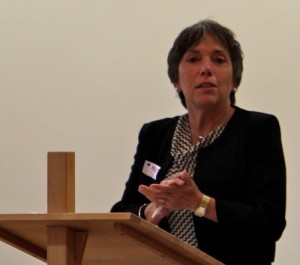 Dr Margot Kaessmann pointed out that one of Martin Luther’s main points was to be able to talk about God in a way that could be understood by all.

She said the reformers could not imagine a world where people would have no faith and asked in the 21st century – “how do we talk about God in a world that has forgotten about God?”

People were seeking meaning in their lives and living in a society where success gave people meaning, Dr Kaessmann suggested.

However, she added: “God gives your life meaning, not society”.

Looking to the future she said reformation was a learning process, churches have to be open for ecumenical dialogue and see the creative power of confessional difference and there must be interfaith dialogue.

She said it was necessary to find ways of translating faith in our times.

The five speakers addressed two questions: Is there any connection between modern life and God, and how do churches respond to society’s criticism of church?

Archbishop Michael Jackson said there was a new complexity when talking about God in today’s society.

Obedience was unpalatable and even more incomprehensible when the God who is worshipped was unseen, he maintained adding that the language used by people in the church was often incomprehensible to those outside it.

However, he said, the quest for personal meaning had not disappeared.

“I would dare to suggest that in the same way as people generally have… taken charge of their own lives, they need to do so in the religious sphere. Many people expect the churches to do their believing for them and seem to believe that passive attendance is sufficient,” the Archbishop said.

Dr Donald Watts asked, “If we as a church or churches are not proclaiming or demonstrating the graciousness of God, how are people to believe?”

He continued, “Yet I do not think we reflect well God’s graciousness. We need to find some way to show that God is an outreaching loving caring God.”

He also posed the question of how people in a pluralist, secular, fragmented society were to find God. People were searching, he said, but churches were not always connecting with these searching people.

Fr Kieran McDermott noted that many people in today’s society were lost, confused and disoriented. He said it was not easy for the seeker as contemporary society tried to eclipse God.

People had a distorted image of God and the way churches spoke of God, faith and redemption was incomprehensible to many, Fr McDermott suggested.

For many young people, in their search for meaning in their lives, the Church was marginal in their quest, he contended. Quoting Pope Francis, he said Churches must go to the peripheries to find people.

As in the Reformation, he said, authority was being challenged. The challenges faced by the church required creative responses from Christians. “We will have to do things differently than in the past,” he said.

Rachel Bewley–Bateman of the Society of Friends explained that George Fox, founder of the Quakers, believed it was possible for people to have a direct relationship with God and that Jesus was preaching life not setting out a number of institutions.

“We are on a journey and we can learn from each other and it is important that we have the opportunity to learn from each other – not just the select few but everyone in the pew,” she said. But Mrs Bewley–Bateman added that the language must be translated so that people could understand what was being said.

Fr Mikhail Nasonov suggested that in modern Christianity people did not live by what they said. 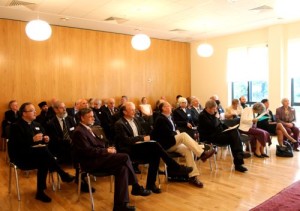 He emphasised that “the very action of renewal must start with ourselves and we must live according to the Gospel. We forget the importance of this to the people who surround us in the church”.

A number of strands emerged from group discussions in the morning.

These included: the need to make the truth relevant, the need to find languages to speak with a world that already belongs to God, the need to be an affirming, encouraging and a serving people who speak the truth in love, the need to be united in Christ and deal with the critics together, the need to find authentic words and deeds about God in order to invite people into a way of life and not just a passing adherence to an institution, the need to demonstrate unconditional love and the need for the church should build communities.

Bringing the session to a close, Dr Kaessmann made five points:

·     Focus on the church as an institution brings us back to the Reformation.

·     Renewal starts with faith and spirituality.

·     In a fragmented world the church can offer community and tell stories of community – the best stories are of inclusion and participation.