Home > News > Conference focuses on role of women in Church

Conference focuses on role of women in Church 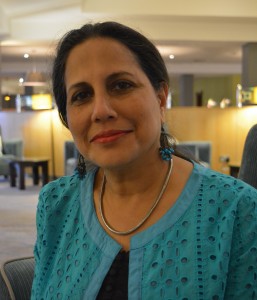 Concern over India’s child sex ratio of 914 females to 1,000 males was one of the issues raised at the recent conference of the leaders of catholic reform movements in Limerick.

In a press statement issued at the conclusion of the conference, the international delegates said central to participants’ discussion was the role and full equality of women in Church life.

“During a very open and honest discussion, it became clear that there is much pain concerning the exclusion of women from governance, leadership and ordained ministry – and how that causes division and affects the entire life of our Church,” the leaders stated.

Delegates also called for the Church to pay particular attention to women who are living in situations of poverty, oppression and violence.

One of the participants at the conference was Dr Astrid Lobo Gajiwala, a Catholic lay woman from Mumbai, who with her husband Kalpesh Gajiwala, has been a consulter to the Asian bishops’ plenary assembly on the family.

Dr Lobo Gajiwala has a Masters in microbiology, a PhD in medicine and a diploma in tissue banking. She ‎ heads the tissue bank of Tata Memorial Hospital in Mumbai.

She also holds a diploma in Theology for the Laity, and has written a number of books as well as contributing to Catholic journals while teaching at St Pius X College, the Archdiocesan Seminary in Mumbai, and the Jesuit Regional Theologate, ‎Gujarat‎.

Speaking about next October’s synod, she said as an Indian woman, her concerns were very different to those of a more Eurocentric focus.

“For Europe and the US it is mainly the issue of the divorced and remarried but for me it is not – it is about women in poverty. Indian women who literally have second class status with little or no access to education or healthcare.”

“We have the highest maternal mortality rate in the world but we also have a declining sex ratio. In the age group from birth up to six, “our sex ratio is as low as 914 girls to 1,000 males. In some places it goes down to eight hundred and something. The reason is that the girl child is killed off. So how do you look at family in this context?” she asked.

“For me these are very real concerns and I wish that they would be brought to the agenda of the family synod,” Dr Lobo Gajiwala said in Limerick.

She said the synod on the family also needed to address the issue of interfaith families.

“In Europe Catholics are a majority but in India we are a very very tiny minority of between 2-3% of the population. So if you are talking about the family, will you be addressing only catholic families – or setting out principals that are universal across all religions from Hindu families to Muslim families and interfaith families – which are an increasing in number in our countries.”

She explained, “I have an inter faith marriage – my husband is Hindu. When I got married in 1988 the number of inter-faith marriages was around 10% but this has already increased to 20%. In certain states it is as high as 50%,” she commented.

“This is an increasing issue – how is the family synod going to be addressing it?”

According to conference organiser, Fr Tony Flannery, the resignation of Pope Benedict marked the end of an era and Pope Francis had ushered in a new era which was “our best chance to renew the church for a long time”.

Up to 40 Catholic priests and laity from Ireland, Austria, Australia, Germany, India, Italy, Slovakia, Switzerland, the UK and the US took part in the four-day meeting. 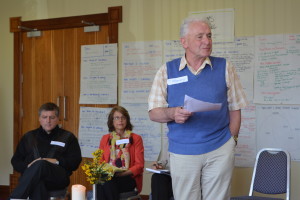 The meeting called on the bishops of their respective countries to courageously and publicly to support the vision and the programme of Pope Francis for the Church.

“A key issue will be to devolve authority away from the Vatican to local churches. Connected to this is the need to enhance the authority of the local church, especially parishes,” they said.

Regarding the forthcoming Synod on the Family, the meeting called for the full participation of Catholics who are LGBT, divorced and re-married, members of interfaith families and other marginalised people in the life of the Church.

“The Church lives in the context of the real world of today and the participants supported a clear recognition of social justice and ecological issues, especially global warming and biodiversity,” they stated.

They added that they particularly set their hopes in the development of a Christian ecological theology and ethic in the light of Pope Francis’ forthcoming encyclical on ecology and social justice.