Home > News > Church in the Philippines is “a carrier of hope”

Church in the Philippines is “a carrier of hope”

The 51st International Eucharistic Congress in the Philippines is a gathering of the faithful and provides people in the Church around the world an opportunity to meet one another, Bishop Kevin Doran has said.

Speaking to CatholicIreland.net ahead of his departure for IEC2016 in Cebu with a delegation of 26 Irish priests and laity, the Bishop of Elphin said the Irish group would have an opportunity to celebrate Mass in a parish in the Filipino city which was originally founded by Irish missionaries.

Ahead of the official opening of the Congress on Sunday 24 January, the Irish group will spend time in this parish on 23 January and help with its outreach to street children.

“One of the features of many third world countries is the large numbers of people who live in very poor accommodation and Cebu is no different,” Bishop Doran stated.

In the aftermath of the hurricane and earthquake that struck the Philippines in 2013, he explained that there were a lot of children left living rough whose families could not be traced. 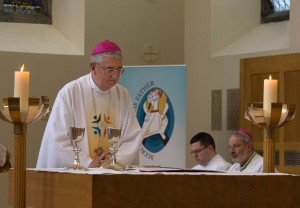 “The Church in Cebu has substantial outreach to them on a daily basis and we’ve been invited to join in a celebration of Mass with the street children and to have a meal with them, because obviously you feed people spiritually and you feed people physically.”

Describing the Church in the Philippines as “a carrier of hope” he paid tribute to its outreach to the poor and the victims of injustice.

In Ireland, he described the involvement of the Filipino people in local parish communities as a source of encouragement and joyfulness.

In the Filipino community in Ireland “we can see people who are not afraid to acknowledge themselves as Christian. I think Europe in some ways over the last 50-60 years has become a little tired. Maybe Christians in Europe lack confidence because of the growing sense of materialism and sense that success and social acceptability are defined in terms of material things rather than in terms of who we are.”

Pope St John Paul II emphasised that who we are is far more important than what we have, he added.

Dr Doran revealed that in June the diocese of Elphin will receive a Filipino priest on loan from the diocese of Bohol who will minister in an Irish parish.

IEC2016 runs from 24 – 31 January and according to Bishop Doran the focus is on mission.

He told the Irish delegation who attended a day of preparation in St Patrick’s College Maynooth on 9 January, “This has a particular significance when we consider the fact that, while Christians are a tiny minority of the Church in Asia, those Christians make up ten percent of the Christians in the world. The Philippines is a majority Christian community and so has a unique role to play in the Church’s mission in Asia.”

He added, “The Filipino people are not just receivers of hope for themselves. They are carriers of hope for Asia, because of Christ in them, who is the hope of glory.” 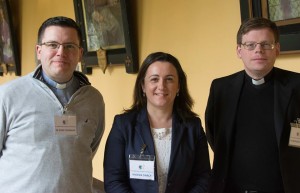 Sheena Darcy (36) was Office Manager with IEC2012 in Dublin and now works as Secretary to the Bishop of Elphin.

“There are seven of us representing Elphin: Bishop Kevin, two priests and four lay people.

Obviously in Cebu the landscape and the faith is completely different. I am expecting a very different congress in many ways but the underlying aspect of the Eucharistic congress is quite similar.

I know that in the Philippines the faith is very very vibrant; even the Filipinos that I have met in Ireland – they are so open and so enthusiastic about their faith. I am hoping that, though I do have a strong faith thank God, for more a renewal – an uplift in faith because of the Filipino people but also because of the sense of the universality of the Church.”

Fr John Coughlan (35) was ordained as a priest for Elphin diocese in 2008. He will give a paper at the theology symposium ahead of the Congress in Cebu.

“I attended IEC2012 but I wasn’t involved in organising it.

I have never been to the Philippines so personally for me it is lovely to attend and be part of what I am sure will be a huge celebration there.

My paper is on mission and the question of how the Eucharist calls us to mission. At the end of Mass, the priest says to us ‘Go and announce the Gospel of the Lord’ or ‘Go in peace glorifying the Lord by your life’. The verbs are really missionary verbs so we don’t go home and put our feet up after Mass. We are called to make disciples of all nations and share the love of God with all people.

I listened to Bro Jeff’s presentation on Typhoon Yolanda in 2013 and the earthquake that preceded it. He went there to photograph and document it. He himself was kind of losing hope in the face of this terrible destruction.

Then he explained how he noticed people’s devotion to the Infant Jesus. They were carrying these statutes and images of the Holy Infant from their homes rather than things like bank account details and other important documents. This was the amazing faith of the local ordinary people … maybe here in Ireland we need some of that hope.”

“I am the diocese’s representative on the national committee of the congress because I was involved with the preparations for IEC2012 in Dublin. I am looking forward to going to the Philippines for the Congress.

I found the congress in Dublin inspirational and I wanted to be part of the next congress.

It is an opportunity for us in the Irish Church to have a different experience of faith in a totally different context and opportunities like that only come along once in a lifetime – that is why I am making the journey to Cebu. I’ve never been in that part of the world before.

It is going to be a learning experience. I am not going in with any prefixed ideas of what I am or am not going to bring away from the Congress. I am just going there to see, to learn, to share and what comes of that, we will see.”

“I am from Zamboanga in the Philippines. I am not attending the Congress.

The earthquake and Typhoon Yolanda really was a devastating time for the Philippines.

What I said in my talk was that in spite of the tragedy and natural disasters, there was a real consolation in seeing how people were resilient because of their faith. I was able to find hope in Cebu and Tacloban and to see how people cling to God rather than their own desolation.

It was timely for Pope Francis to go to the Philippines last January 2015, to a country that had seen the devastation of a natural disaster. He went to Tacloban, the city that was most devastated by Typhoon Yolanda. It was very moving seeing people, despite the rain and although another typhoon was coming in, who continued to pray at the Mass with such devotion.

One man there had lost everything – his wife and children, his parents and his home. But he said he could now better appreciate the cross… and he could see his sacrifice was not meaningless and that God was with him all this time.”