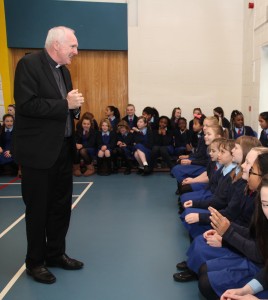 In the wake of a lively debate in a Wexford parish over whether children should be confirmed when their parents never bring them to Sunday Mass, the Bishop of Limerick, Brendan Leahy, has stated that the Irish Church should explore “deferring Confirmation to a later age”.

“My reason is simply that we need to get beyond the ‘package deal’ approach to Confirmation,” he said in an interview with the Irish Catholic. “What I mean by that is, we need to move beyond the cultural practice in Ireland that when you are around 12 nearly everyone automatically makes his or her Confirmation.

“At a later age, there would be more choice involved. Not all would make their Confirmation, but at least then we would be indicating Confirmation isn’t something we just slide into. Of course, I recognise the sacraments are always a gift and don’t depend on our merits or choice as such,” he added.

Bishop Leahy pointed out that the Orthodox tradition confers confirmation (along with baptism and Eucharist) to infants. “I also recognise that Confirmation ceremonies in Ireland are lovely and really well prepared, and we would lose something if we let go of what we have now. But maybe it’s a step we have to take.”

In the February 4th parish bulletin of St Senan’s parish in Enniscorthy, Wexford, the parish administrator, Fr Patrick Banville had complained that the “majority of Confirmation parents and children have been absent from Sunday Eucharist since the start of the school year in Sep 2017”.

“Indeed, they have been absent for many years. Nothing new there, you might argue,” he continued, but this year though the absence was “more significant because I’ve made it abundantly clear that for Confirmation families, participation in Sunday Eucharist is not optional, it’s absolutely essential”. Fr Banville said that he had been “largely ignored”.

“Approximately – and this is upwardly generous – no more than 10 Confirmation childrens’ families have been attending Mass in St Senan’s Church over the past number of months (years!),” he wrote. “It seems the majority of parents have refused to enter the struggle to participate in Sunday Mass, but they will still present their children for Confirmation in March! This suggests that for the majority of Confirmation parents, Mass is not valued, it’s not a love-thing, a matter of attraction and encounter, and this absence (or at least the refusal to enter the struggle to get to mass as a family) suggests that Confirmation is without a context.”

The administrator of St Senan’s parish opened the question to “anybody with an interest”, inviting them to a meeting in the parish centre last Thursday 15th February, “and join in the conversation”.

However, in a message posted on the parish’s Facebook page on 15th February, Fr Banville said that in the light of the “very intensive – and unanticipated – media interest” he was cancelling the meeting. “The proposed ‘faith formation conversation’ I initially envisaged is, I believe, an important one and it does need to occur,” he wrote, but to properly occur, it needed to proceed in a “more structured and shared manner” without “making individuals the subject of publicity or attention. I readily recognise that parents want the very best for their children, so do I, and so does the parish and the church. This was – and is – my goal as a fellow pilgrim”.

Fr Banville said he would consider how “better this conversation might be organised and how I and others – including parents and parishioners – might fruitfully participate”.