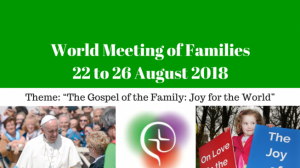 Church leaders have been welcoming the announcement that Pope Francis has chosen The Gospel of the Family: Joy for the World as the theme for the ninth World Meeting of Families and that the event will take place in Dublin from 22 to 26 August 2018.

In a statement on Tuesday, the Primate of All Ireland, Archbishop Eamon Martin said, “After World Youth Day in Krakow this July, the World Meeting of Families in Dublin in 2018 will be the next great global event in the calendar of the Universal Church.”

He said the Catholic Church in Ireland was blessed to have been chosen to host, for the first time, this “special faith-filled event for families”.

He said the theme clearly draws on both the Pope’s Apostolic Exhortations, Evangelii Gaudium (The Joy of the Gospel) of November 2013, and Amoris Laetitia (The Joy of Love, On Love in the Family), published in April.

“It is my hope that families in every parish in the country will be able to participate in the preparation for the World Meeting, and that many families will take part in the various events being planned for late summer 2018,” the Archbishop of Armagh said.

“The World Meeting provides the perfect context for us to rediscover the vocation and mission of the family in the life of the Church and in Irish society.”

“Supporting families is one of the most important aspects of the mission of the Church. As a priest and bishop I have come to know and admire the wonderful work of many individuals and groups who are involved in family support and ministry here in Ireland.”

Elsewhere in his statement, Archbishop Eamon Martin said the World Meeting provides an opportunity to affirm this work and to inspire new initiatives to sustain the family as a source of joy, hope and cohesion in the Church and in society.

He said Pope Francis often reminded the faithful that no family is perfect and every family has its struggles and wounds.

“The World Meeting of Families in Dublin will be a success if it helps us to celebrate and support family life whilst encouraging us to reach out in love to families who are overwhelmed by the challenges and pressures of everyday living,” he stressed.

“Over the next two years, in our preparations for the World Meeting of Families 2018, the Catholic Church across the country has an opportunity to map out and advocate a new Charter and Mission for the family in the context of twenty-first century Ireland.”

Separately, the Church of Ireland Archbishop of Dublin, the Most Revd Dr Michael Jackson, also welcomed the Vatican’s announcement.

In a statement Archbishop Jackson said, “This is an event of international proportions and of considerable significance right across society in general. Wherever people congregate and share lives, issues associated with family life, care and nurture are always to the fore.”

He congratulated Archbishop Diarmuid Martin with whom he said he has had “the pleasure of working for almost six years in these dioceses” and also Archbishop Vincenzo Paglia who is a friend for more than a decade through the Community of St Egidio in Rome.

“The World Meeting of Families intends to open wide its doors in generosity of invitation to all interested parties. We in the Church of Ireland tradition recollect with great joy the ways in which we were included in The International Eucharistic Congress and pledge our willingness to assist in any ways that our brothers and sisters in Christ think may be helpful.”

Bishop Donal McKeown of Derry also welcomed Pope Francis’ announcement saying it was “good that we now have both the dates and the theme for the WMOF in Ireland.”

He added that Pope Francis has been clear about the importance of committed human relationships for the welfare of both adults and children.

“Thus the WMOF theme is very positive and in line with much of Pope Francis’ teaching – The Gospel of the Family: Joy for the World. This offers us an opportunity to reflect on how the Church can serve the Common Good by promoting the faithfulness, generosity and idealism which the New Testament calls us to believe in.”

“Of course, all of this divine dream for human relationships is seen in the context of this year’s emphasis on the ‘balm of mercy’, readily available to heal the many wounds in people’s emotional and spiritual lives.”

“I hope we can move beyond any sterile liberal/conservative labels and see what the Gospel can contribute to human healing and flourishing through the wisdom of the God who creates, heals and reconciles.”

The announcement of the date and theme for the 9th World Meeting of Families (WMF) was made at a press conference in the Vatican on Tuesday morning.

It was attended by Archbishop Diarmuid Martin of Dublin and the head of the Pontifical Council for the Family, Archbishop Vincenzo Pagila.

The Archdiocese of Dublin is the host diocese for this event which takes place once every three years in different parts of the world.

Addressing the press conference Archbishop Martin said, “The 2018 World Meeting will be held in Dublin, but it is an event of the entire Church”.

He said it was significant that Pope Francis chose the family as the theme of the first Synod of Bishops of his Pontificate and that he launched a new methodology for the Synod which would involve consultation with families.

“Hopefully the World Meeting will be an important milestone in the application of the fruits of the Synodal process and of Pope Francis’ Apostolic Exhortation Amoris Letitia,” Archbishop Martin said.

The Dublin Meeting will be prepared for by a process of catechesis – based on Apostolic Exhortation Amoris Laetitia (The Joy of Love) and this will take place right across the Church in Ireland during 2017 and 2018.

It is hoped that something of that catechetical process will be shared with other Churches around the world, especially in Europe.

Archbishop Martin said the Dublin World Meeting of Families, more than earlier Meetings, should be a world event even in its preparation.

“The World Meeting of Families in Dublin will hopefully be a festival of witness to the love of God revealed in Jesus Christ. The vocation of Christian couples, supported by the Sacrament of Marriage, is a call to witness to that love and to experience the joy of bringing the love of Jesus to those who are troubled and challenged,” said Archbishop Martin.

It is too early to know if Pope Francis will attend the WMOfF.

His programme is normally announced just a few months prior to any event. The Pope has expressed his desire to attend, and such a visit of the Pope would bring great joy to Irish Catholics and others, but the final decision will depend on a number of factors.

Given the age of Pope Francis, a possible visit of the Pope in 2018 would inevitably have a more restricted programme than that of the papal visit of Pope St John Paul II in 1979.

The first of three National collections will take place in the parishes across every diocese in Ireland this weekend, 28/29 May, which will go towards the very substantial costs of Ireland hosting this event.