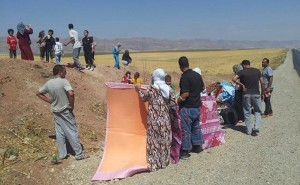 Iraqi family stops on the road during their flee from Isis militants.

Pope Francis has called the Catholic Church to pray for peace and in particular in Iraq. Yesterday he tweeted:    “I ask the international community to protect all those suffering violence in Iraq.”

Meanwhile  Archbishop Silvano Tomasi, the Holy See’s permanent observer to the UN in Geneva says that Church leaders are uniting in defence of Christians in Iraq.

“At this moment, the Holy Father, Pope Francis, and other members of the Christian community, including the World Council of Churches, are taking a strong stand in defence [of the Iraqi Christians] and their right to survive and to live in peace in their own home, which for the last 2,000 years has seen them active and contributing to the development of the region,” he told Vatican radio.

He said it was hard to convince the Western powers “to take a strong stance in defence of the Christians,” but the international community was beginning to act.

“We are talking about a special session here in Geneva with the Human Rights Council. There has been a special meeting of the Security Council in New York and some governments are beginning to express their suggestions for practical action in defence of these populations in northern Iraq and the United States has decided some military action.”

Archbishop Silvano Tomasi  said that in the long run what was needed was a “dialogue of reconciliation and the acceptance of diversity in the different political and cultural contexts of the Middle East, so that a person is considered a citizen with equal rights and equal duties for the states, free to associate with other people who are of the same faith without being catalogued as a minority.”

The Holy See’s permanent observer to the UN in Geneva said they hoped  that “the voice that is surging from different Christian and religious communities, from moderate Muslims, from people of good will around the world, may find the response of concrete humanitarian assistance that is provided for the Christians in northern Iraq as well as some political and even effective military protection.”

In the United States, the chairman of the Committee of International Justice and Peace of the U.S. Conference of Catholic Bishops (USCCB) asked the U.S. bishops to invite the people of their dioceses to pray for peace in Iraq on Sunday, August 17.

Earlier in the week Pope Francis named Cardinal Fernando Filoni as his personal envoy to the war-torn country. Plans are also underway to bring all the Holy See’s representatives in the region to Rome for a meeting to support the tens of thousands of people who’ve been forced to flee by militants of the recently established Islamic State.