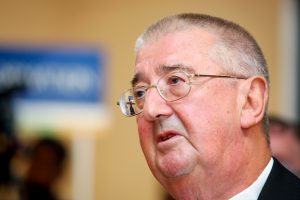 “What was true yesterday remains true today,” Bishop Kevin Doran said on Saturday in his response to the referendum outcome.

Acknowledging the “reality” that Irish people voted by “a significant majority for abortion”, the Bishop of Elphin said his thoughts went out to the “thousands of good people” across his diocese and across the country “who worked so hard to protect the right to life both of women and their unborn children”.

“Huge numbers of you, motivated by real compassion, also voted No. I share your sadness,” Dr Doran said as he reached out to the 723,632 people who voted to retain the Eighth Amendment.

Donegal was the only county to vote No to repeal. The other 39 constituencies voted Yes, with 66.4% of the overall electorate backing repeal. The turnout was 65% of the electorate.

On Saturday, Taoiseach Leo Varadkar told Independent.ie that for 35 years Irish society had “hidden our conscience behind the Constitution” but voters on 25 May 2018 had said “no more”.

In his pastoral letter, Bishop Kevin Doran said there would be plenty of time for analysis in the days ahead, but for now he wanted to encourage No voters with the thought that “what was true yesterday remains true today”.

“Every human being without exception has an inherent right to life which comes from God, in whose image we are all made.”

The Bishop of Elphin also highlighted that in many countries where abortion has been legal for years, Christians continue to bear faithful witness.

“That hope must inspire us now as we proclaim anew the Gospel of Life, both in the political arena and in the renewal of our pastoral outreach. As Church, we will continue to explore effective ways to support women and their unborn children, families in difficulty and women who have had an abortion.”

He said new ways needed to be found to help Irish women and men to rediscover the dignity of human life from conception to natural death.

In Maynooth, this morning, Archbishop Diarmuid Martin said many will see the result of the referendum as an indication that the Catholic Church in Ireland today is regarded by many with indifference and has having a marginal role in the formation of Irish culture.

In his homily at a ceremony to ordain new deacons, Dr Martin said the Church that is called to make present the Jesus, who is full of mercy and compassion, is seen by many as weak in compassion.

“The Irish Church after the Referendum must renew its commitment to support life. The Church is called to be pro-life however not just in words and statements and manifestoes but to be pro-life in deeds, by being a Church which reflects the loving care of Jesus for human life at any stage.”

“That loving care includes support to help those women who face enormous challenges and who grapple with very difficult decisions to choose life,” the archbishop said.

“Pro-life means radically rediscovering in all our lives a special love for the poor that is the mark of the followers of Jesus. Reshaping the Church of tomorrow must be marked by a radical rediscovery of its roots.”

Separately, the Church of Ireland Archbishop of Dublin, Dr Michael Jackson said in a statement that one of the factors that was a contributor to the discussions ahead of the vote on Friday was the telling of and the listening to stories ‘on both sides.’

He said this process of telling and listening to stories began in the context of the Citizens’ Assembly and continued thereafter, around kitchen tables and on the national airwaves, right up until, in the latter case, the moratorium on public broadcasting ahead of the Referendum itself came into force.

“As a consequence of the decision of the people, the Constitution of Ireland is going to change. The citizens of Ireland are, as of now, called upon to show dignity and respect, care and compassion as we continue to co-operate and to collaborate at every level of our society in what will undoubtedly be onerous days and weeks of decision around policies and practices.”

According to Archbishop Jackson, the national expectation now is that the promise of positive and proactive regulation will be put in place safely in regard to the termination of pregnancy locally within the twenty-six counties.

“This will be a powerful antidote to the reality of specific dangers such as currently exist for individual women who have felt stigmatised in countless ways for long decades.”

Dr Jackson said a further hope would be that there would be a real and lasting acknowledgement of the unborn in Irish society, an acknowledgement that needs to extend over many decades when stigmatisation has too often been the default setting of response.

“Once again Ireland will need to dig deep, as we have done often in our long history, into words such as healing and reconciliation but in a new area of life.”