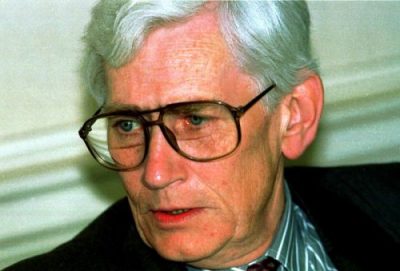 Church leaders have paid tribute to Seamus Mallon, Stormont’s former Deputy First Minister and the former deputy leader of the SDLP, who died on Friday aged 83.

In a statement, Archbishop Eamon Martin said the people of Armagh and Ireland had lost “one of our most respected sons and bravest leaders”.

Describing the politician as, “a person of global stature,” Dr Martin said Seamus Mallon gave his gifts unselfishly and tirelessly to serve the betterment of the whole community on this island, north and south.

“Seamus was a shining example of someone who gave his life to that vocation and in the service of others. He will be remembered as a man of integrity and great courage who was not afraid to speak up or call it as it was – even at great personal risk.”

Elsewhere in his statement, Archbishop Martin noted that Seamus Mallon was, “a man of strong faith” and was “calm, fair and principled, and always respectful of the rights of others”.

The Primate of All Ireland said a fitting tribute to his legacy would be a renewed effort by all political leaders to build that “shared home place” which was Seamus Mallon’s vision and lifelong project.

Archbishop Michael Jackson, the Church of Ireland Archbishop of Dublin and Glendalough, said Seamus Mallon was a man who was “renowned for his great courage in political life, his tireless commitment to community and his integrity in speaking out against those who encouraged and were involved in violence”.

Dr Jackson added, “At all times he had the well–being of Ireland, North and South, at heart.”

Seamus Mallon, along with John Hume, was key to the negotiations that brought about the Good Friday Agreement. He served as deputy First Minister of Northern Ireland from 1998 to 2001.

He followed his father into the teaching profession and became headmaster of St James’s Primary School in Markethill.

He was also involved in the GAA and played football for Armagh.

In the late 1960s, Seamus Mallon became involved in the civil rights movement in Northern Ireland and in the SDLP.

He served as Deputy First Minister in the power-sharing administration which emerged following the signing of the Good Friday agreement, serving with David Trimble as First Minister.

A statement issued on behalf of John Hume and his wife Pat on Friday paid tribute to their “dear friend”.

“Men like Seamus Mallon don’t come along too often, we should for grateful for his work in our time and cherish his legacy and preserve his values by never giving up on standing up for what is right, standing tall against prejudice and injustice and standing for making Ireland a country of peace and partnership,” the Hume statement said.

“He was a man of huge strength and courage, who stood with John for many years in the fight for justice, peace and reconciliation on this island.”

DUP leader, Arlene Foster tweeted, “Very sorry to learn of the passing of Seamus Mallon. My sincere sympathies are extended to his family & friends. As Seamus said, ‘We have two stark and clear choices. We can live together in generosity and compassion or we can continue to die in bitter disharmony.’”

In a statement, the current leader of the SDLP, Colum Eastwood, also paid tribute to the life and legacy of Seamus Mallon.

He said Ireland had lost one of its most fierce champions for justice, equality and peace.

Mr Eastwood said that Seamus Mallon’s life’s work carved a pathway beyond our troubled past and gave us all the opportunity to build a shared home on our island. He added, “Seamus Mallon was a force of nature.”

“In the darkest days of conflict, when hope was in short supply, Seamus represented the fierce thirst for justice that ran through the SDLP and through communities that had lost so much to political violence.”

“His passion for peace underpinned by truth, justice and reconciliation came from a lifetime as a proud son of Markethill where he was born, grew up and raised his own family. It didn’t matter who you were, where you worshipped or what your politics were, there was always help to be found at Seamus’ hearth.”

“I joined the SDLP because of people like Seamus Mallon. His absolute opposition to the murder and maiming of our neighbours, his immense work to reform policing and deliver a new Police Service that could command the support of our entire community and his unrelenting commitment to making this a place we can all call home inspired so many young SDLP members.”

“Throughout my political life, Seamus was a constant source of guidance, advice and, when needed, some robust critical reflection. His support has been an immense source of personal pride. I hope that I’ve done him proud in return.”

“Seamus lived for Ireland and worked for all of its people – we are all the better for it.”

Mr Eastwood said the pride of Seamus Mallon’s life was his dearly loved late wife Gertrude, their daughter Orla and granddaughter Lara. “My thoughts and prayers are with Orla, her husband Mark, and Lara at this difficult time. I hope they’re comforted by Seamus’ incredible legacy and the indelible mark he left on the lives of so many people.”

Deputy First Minister Michelle O’Neill said Mr Mallon was “a significant political figure who made a huge contribution to the politics of peace and the Good Friday Agreement”.

Former US president Bill Clinton described Mr Mallon as “a hero of the peace process and a profoundly good man”.

“A teacher in practice and in heart, the lessons of his life and power of his example are as important today as ever.”

“I will always be grateful for the opportunity to have known and worked closely with him.”

Former British Prime Minister Tony Blair said Mr Mallon was “one of the most important architects of peace in Northern Ireland”.

“Brave, blunt, often prepared to swim against the tide if he felt it right, he was someone deeply respected and admired across the troubled landscape of Irish politics,” he tweeted.

Taoiseach Leo Varadkar said history would remember Mr Mallon as “an architect of the Good Friday Agreement, a committed peace builder and a tireless champion of an inclusive Ireland. He always opposed sectarianism and discrimination in any form”.

“When others in his community advocated violence, Seamus had an unswerving commitment to constitutional nationalism. He was a peacemaker who put us on the path to reconciliation,” Mr Varadkar said.