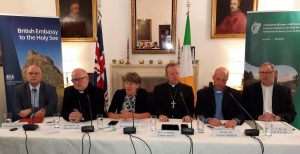 The Good Friday Agreement “opened a door away from violence into a world of goodwill”, the Church of Ireland Primate, Archbishop Richard Clarke, told Vatican Radio on Tuesday.

The Archbishop was in Rome along with Archbishop Eamon Martin and the leaders of the Presbyterian and the Methodist Churches in Ireland to mark the twentieth anniversary of the Good Friday Agreement at an event organised by the British and Irish Ambassadors to the Holy See.

The Good Friday Agreement was signed on 10 April 1998. The accord helped to bring an end to sectarian violence in Northern Ireland.

Both Archbishop Clarke and Archbishop Martin were asked by Vatican Radio what they saw as the most important achievements of the Agreement.

According to Archbishop Clarke, “There are no quick fixes,” but he added that the accord “gave us the opportunity – the breathing space – to look for goodwill”.

Urging people in Northern Ireland to keep on working for peace he said, “Goodwill is not something you can create with a political agreement; goodwill is something that has to really grow and the sense of a responsibility to a common good.”

The Agreement “provided a structure that took us away from violence but of course it couldn’t create a sense of the common good, it couldn’t create goodwill in itself. The role of all the different Christian traditions together is to try to ease people towards a better will towards one another.”

He said the process could sometimes be three steps forward and one step back, or sometimes two steps back.

Archbishop Eamon Martin of Armagh stressed that the Good Friday Agreement was “a very historic moment and one that we should not lose sight of”.

“For me, the peace that we have achieved – albeit a fragile peace – is something that we can attribute to the Agreement and indeed to all those wonderful people who took risks – who gave leadership – and who persevered in trying to achieve peace.”

Dr Martin added that the reflection, the discussion, and the memories of the Good Friday Agreement shared in recent weeks and months had reminded people of “the life-saving moment” which the Agreement symbolised.

“And even though it took some time for the violence to peter out, I think that we all recognise that moment 20 years ago as being a watershed moment – a moment where together the people of Ireland, both North and South, gave their assent to an agreement that they would denounce violence as a means of achieving a political end.”

Asked about the Brexit negotiations and whether they were contributing to tensions in Northern Ireland, Archbishop Clarke said, “I think potentially there could be enormous risk; I speak to you as someone who is from the Republic of Ireland and so perhaps I have a different perspective. I don’t think it is a minority perspective – I think there is an anxiety – both in political and church communities in Northern Ireland that it could drag us back if there were to be a hard border, that it could in fact reignite the fears and the antipathies that in many ways we are slowly working our way through. But if there was again a border that mattered on a day to day basis, I think in fact we could find ourselves being brought back into dangerous places.”

He added, “Economically it is just hard to know where it will go and how it will go but … we need to be very cautious about the dangers it could pose to the Good Friday Agreement.”

Archbishop Eamon Martin warned that one of the challenges of the Brexit negotiations was to avoid “getting back into a language of barriers and borders and walls and division”.

He added, “We are quite good in Ireland at creating walls and barriers; we are less accomplished at bridge building.”

“I think the achievement of the Good Friday Agreement, looking back 20 years, was as Archbishop Richard has said, it gave permission to bridge builders, to peacemakers, to reconcilers, to healers to get on about their work.”

Archbishop Martin warned, “Once we begin to get into territory where we are starting to talk about borders, drawing lines on the map again – it tends to divide us and put us back into our bunkers – back into our respective corners where we tend to eyeball each other from positions of suspicion rather than from a desire for reconciliation.”

He said the danger of Brexit was that it “creates barriers and borders in our minds and in our hearts which are much more difficult to overcome than any physical or geographical divides.”