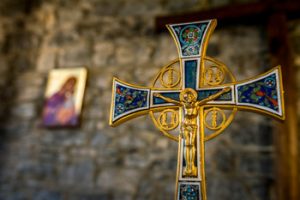 The relationship between the World Council of Churches (WCC) and the Roman Catholic Church is being considered at a meeting currently running at the Ecumenical Institute in Bossey in Switzerland.

The Catholic Church is not one of the World Council of Churches’ (WCC) 348 member Churches, accounting for more than half a billion Christians around the world.

However since 1965, following what the WCC calls “the ecumenical thaw in relationships . . . encouraged by Pope John XXIII and the Second Vatican Council,” a Joint Working Group (JWG) was established between members of the WCC and the Pontifical Council for Promoting Christian Unity.

Dublin’s Archbishop Diarmuid Martin is co-moderator along with Metropolitan Nifon of Târgoviște (Romanian Orthodox Church), a member of the WCC central and executive committees.

In a 50th-anniversary message to the group in 2015, Pope Francis urged the members to “become ever more a ‘think-tank,’ open to all the opportunities and challenges facing the churches today in the mission of accompanying suffering humanity on their path to the kingdom, by imbuing society and culture with gospel truths and values.”

From 13 to 17 September members of the JWG are meeting with sessions such as one that aims to address “cooperation on inter-religious relations, on refugees and migrants, and on justice and peace,” according to the WCC.

There also will be discussions of Pope Francis’s exhortations Evangelii Gaudium and Amoris Laetitia, and his encyclical Laudato Sí.

Other topics include finding doctrinal common ground, world mission and evangelisation, marriage and the family, environmental threats to God’s creation, the on-going ecumenical pilgrimage and “building the agenda of the JWG for the coming years,” according to WCC.

Tapestry depicting “that all may be one”. Designed by Einar Forseth for the Ecumenical Centre, Geneva, woven in Aubusson, France.

Separately, it has been announced that Pope Francis will take part in the final meeting of the World Day of Prayer for Peace in Assisi on next Tuesday, 20 September.

More than 450 religious leaders of different faiths are expected to gather to pray for peace and strengthen dialogue in the spirit of Assisi.

The first World Day of Prayer for Peace of Assisi was held by Pope Saint John Paul II in October 1986 and included religious leaders such as the Dalai Lama and the Archbishop of Canterbury, who joined with the Pope to call for peace, unity, and interreligious understanding.

Next week in Assisi, Pope Francis will be greeted by a group of faith leaders, including the Archbishop of Canterbury and the Ecumenical Patriarch Bartholomew.

The day will include afternoon prayer in St Francis’ basilica and the religious leaders will also meet victims of war.

The Pope will meet religious leaders and others individually including two Jewish and Muslim leaders and the event will conclude with a signing of an appeal for peace that will then be handed to children representing different parts of the globe.

The Bishop of Assisi, Domenico Sorrentino, told the Vatican Radio that the meeting is a great occasion to bring people together “believers in all the religions together in this moment in which the world is facing big crises every day”.

Thirty years ago Saint John Paul II closed the first ever  meeting with the call to keep spreading the message of ‘Peace and living the spirit of Assisi’, and since then the community of Sant’Egidio has convened an annual meeting of religious leaders to discuss critical global issues of peace, unity, and interreligious dialogue.

This year’s World Day of Prayer for Peace comes at the end of a three-day Sant’Egidio community meeting titled ‘Thirst of Peace. Religions and Cultures in Dialogue’.