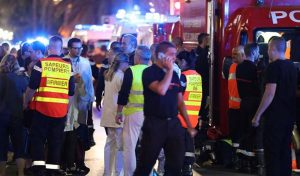 In the aftermath of an horrific terrorist attack in Nice during Bastille Day celebrations which killed 84 and left many injured, including one Irish citizen,  Pope Francis has written to the Bishop of Nice expressing his “profound sadness and his spiritual closeness to the French people.”   Condemning the attack, the Pope said he entrusted those who had lost their lives to the “Mercy of God” and he shared  “the pain of the bereaved families”.

In the telegram sent on his behalf by the Vatican Secretary of State, Cardinal Pietro Parolin, Pope Francis also expressed his sympathy to those wounded.  He concluded by imploring from God the gift of “peace and harmony” and invoking divine blessings on the families affected by this tragedy and all the people of France.

In Ireland, the Primate of All Ireland Eamon Martin called for prayers for those killed and injured. “The horrific scenes on the streets of Nice once more send shock waves into our homes and hearts.  How helpless we all are when someone decides to deliberately and indiscriminately target human life,” he wrote.  “Please keep the people of France in your prayers and especially the dead and injured, the families and loved ones of all those caught up in this senseless and brutal act.”

The Archbishop of Armagh called on everyone to “undertake an act of kindness or compassion this weekend, perhaps in some small way to counterbalance with love this awful crime”.

Dr Diarmuid Martin, Archbishop of Dublin said the Nice attack was an “attack on democracy and the values that underpin democracy”.

“Right across the world innocent men, women and children are increasingly falling victim to the violence of terrorism,” he wrote.  “We cannot overlook any such attempt anywhere, just because it takes place in distant lands.  All terrorist endeavours attack the fundamental basis of our democratic co-existence. There is only one way to fight attacks on democracy and that is to reinforce democracy and uncompromisingly affirm our commitment to democracy.”

Democracy  is not just about voting in elections.  It involves respect for the “rights and values of each person and for the rule of law”, he said.  “Where the quality of democracy is weakened, the door is opened to those who use their own ideology or power to render us all weaker and less protected.” 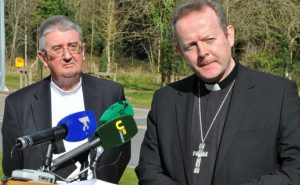 He went on: “I am speaking about those who provoke terrorism through political or religious ideology.  It applies also, however, to those who use violence on our streets to advance the filthy interests of the drug trade.  It applies to governments which allow demagogy or corruption to flourish unchecked.   It applies also to unprincipled compromise in international relationships.”

Democracy involves “participation and respect for difference and the rights of all people and peoples”.

The message of Jesus Christ is “above all a commitment to allow love to embrace those who are marginalised.  My prayer is that that those who have died in the Nice attack will experience a loving encounter with the Lord, and that those who mourn will encounter the loving comfort of those around them, and that love might even change the hatred that has twisted the hearts of those who foster violence,” he concluded.