Pope and King agree dialogue the “only option” for Syria 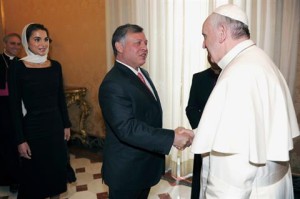 Pope Francis and King Abdullah II of Jordan have said dialogue and negotiation are the “only option” for putting an end to the conflict and violence in Syria.

In a statement issued after their meeting in Rome on Thursday, the Vatican said that the Pope and the Jordanian King “reaffirmed” the path of “dialogue and negotiation” to put an end to the loss of many human lives, “especially among the unarmed population.”

The statement was made ahead of the defeat of a British Government motion to authorise military action in Syria if it was supported by evidence from UN weapons inspectors investigating claims that the Assad regime had used chemical weapons against civilians.

The coalition government under David Cameron was defeated by 285 votes to 272, a majority of 13.

Responding to the outcome, the British Prime Minister said it was clear that Parliament, reflecting the views of the public, did not want to see military action and added that the Government would “act accordingly”.

While reporters were still present, King Abdullah was overheard to tell the Pontiff, “I have tremendous respect for what you are doing and for what the Catholic Church does.”

Afterwards, the King and some of his aides held a meeting with the Vatican Secretary of State, Cardinal Tarcisio Bertone, as well as Archbishop Dominique Mamberti, Secretary for Relations with States.

The Vatican statement said that the two sides also discussed the problem of stability throughout the Middle East, Israeli-Palestinian relations and the question of the status of Jerusalem, a city sacred to Christians, Muslims and Jews.

It also paid tribute to the King’s commitment to promoting inter-religious dialogue and his decision to convoke a conference in September about the challenges facing Christians in the Middle East.

Other Christian Church leaders have also voiced their opposition to a military intervention in Syria, including Archbishop Maroun Lahham, patriarchal vicar for Jordan in the Latin Patriarchate of Jerusalem.

He told Vatican Radio that the meeting between Pope Francis and King Abdullah was an opportunity for them to discuss ways to encourage peace in Syria “in the midst of all these threats we are hearing.”

“What is happening, Jordan – although it is a small country – can play an important role for peace in Syria,” he said.

Archbishop Lahham said, “We don’t want this desire for war applied in Syria. We hope that the voice of reason – and for us, the voice of faith – prevails and that a political solution to the Syrian crisis will be found.”

Separately, a statement published on the Latin Patriarch Fouad Twal’s website, pleaded with the US and its allies to be cautious and think again before taking any military action.

“Our friends in the West and the US have not been attacked by Syria,” he said. “With what legitimacy do they dare attack a country? Who appointed them as ‘policemen of democracy’ in the Middle East?”

“Why declare war when UN experts have not yet delivered the definitive findings on the chemical nature of the attack and the formal identity of its agents?” the Patriarch asked.

“We witness here a logic reminiscent of the Iraq war preparation in 2003. Do not repeat the ‘comedy’ of weapons of mass destruction in Iraq when there were none,” he warned.

Speaking from Damascus, the leader of the Melkite Catholic Church told AsiaNews that an American-led assault on Syria would be “a criminal act, which will only reap more victims.”

Patriarch Gregory III Laham said that the US and other Western nations have done nothing to stop an influx of “Islamic extremists from all over the world are pouring into Syria with the sole intent to kill.”

Today the country desperately needs stability, he said, and “an armed attack against the government really has no sense at all.”

The Melkite Patriarch strongly supported the call by Pope Francis for peaceful dialogue and an end to the civil war in Syria. He said that he had sent the Pope’s plea for peace to all the Melkite parishes in Syria.

Patriarch Gregory III also voiced his concern that if Islamic militants come to power, Syria’s Christians will be under heavier pressure to leave the country.

Without a Christian presence to ease conflicts between Muslims, he added, there would be no realistic hope for democracy in Syria.

“If there is an armed intervention, that would mean, I believe, a world war. That risk has returned,” he said.