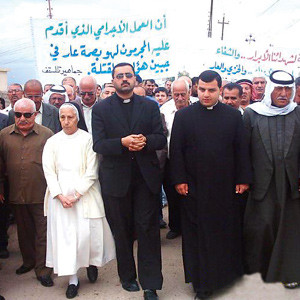 European officials are scheduled to hold discussions on Monday to discuss the situation in Iraq.

Ahead of the meeting, a delegation of Iraqi Christian leaders, head by Chaldean Catholic Patriarch Louis Raphael Sako of Baghdad, visited Brussels to highlight the plight of the country’s Christians.

They warned EU officials that a new civil war would threaten the existence of the country’s “very fragile” minority groups.

The Christian leaders stressed the positive role that the religious minority can play as a “disinterested mediator” in helping resolve conflicts between the countries two competing Islamic groups.

At the same time, the Chaldean Patriarch said that a continued exodus threatens the existence of a Christian community in Iraq.

“If they leave, their history is finished,” he said.

Last weekend, Cardinal Sean Brady appealed to politicians in Ireland and the EU to use their influence to intercede on behalf of Christians in the Middle East whose very presence is threatened he warned.

Describing Christians in the Holy Land as “menaced”, the Primate of All Ireland appealed to political leaders to speak up for Christians and “demand that they be given rights to exist there.”

Speaking following a procession and Mass to commemorate the martyred Archbishop of Armagh, St Oliver Plunkett, Cardinal Brady said, “Those who are in a position to do something about it, and have the power to do it, need to keep putting pressure on the relevant authorities.”

“We must always remember them and pray for them and support them,” Dr Brady said.

“I’d like to see those who have the power to do more, recognise what is happening. I think the rest of the free world has to speak up for them,” he commented.

Referring to St Oliver Plunkett, who was the last Catholic martyred at Tyburn in 1681, the Cardinal said, “God raises up in every generation people of integrity, not just to be saints for themselves but to inspire others.”