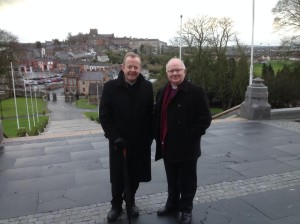 “We need to speak up loudly and often for the voiceless thousands who are not allowed to remain in peace and safety in the place they call home,” the Catholic and Church of Ireland Primates of All Ireland have said jointly in their Christmas message.

Archbishops Eamon Martin and Richard Clarke of Armagh said the plight of Christians in Iraq, Syria and the whole Middle East comes especially to mind this Christmas time.

The two churchmen said in many parts of the world this year, people have been living in the grip of fear.

“Think of those caught up in the cruel onslaught of militants in the Middle East, North Africa and South Asia; or those whose families have been devastated by the spread of Ebola disease in Sierra Leone and Liberia; and others in troubled parts of the world like Eastern Europe who are fearful about their future because of continuing war and conflict,” they observed in their message which was issued on Thursday.

They said many who had fled the bloodshed, persecution or disease and now find themselves as refugees far from home, sometimes in foreign lands. “They are cold, hungry and lacking shelter.”

Archbishops Martin and Clarke also stated that it was a sad reflection on our world that many people have been forced violently to flee to safety because of their religion, ethnicity or cultural identity.

Writing about the impact of fear, the two churchmen said that there is “fear and need in our own land too”.

“Many parents across Ireland are afraid for their children’s well-being because they lack the necessities for any level of security or comfort in daily life.”

They added that the plight of the homeless on our streets “has been much in our minds in recent weeks” and they urged all people of good-will to work together so that the needs of children and the most vulnerable are protected.

Reflecting on the Nativity story, they said the infant Jesus and his earthly parents also had to face need, hatred and persecution in Bethlehem and had to flee for the relative safety of Egypt.

“Yet the simple message of the angel to the shepherds was ‘Do not be afraid’ for this child would be the Saviour of the world.  He is called Emmanuel, which being translated means God with us,” they said.

Separately, in their joint Christmas message, the Bishops of Derry, Bishop Donal McKeown and Bishop Ken Good said the harsh realities of life for many in today’s world raise big questions about the meaning and purpose of it all.

They said this is a world in which too many have to contend with poverty, homelessness and loneliness; where many live with dangerous political uncertainty and where, for large numbers, refugee status far from home is their lot.

“Harsh realities such as these can lead us to the conclusion that life is not only unfair, but that it must be random, haphazard and aimless,” the commented.

The birth of Jesus in Bethlehem, they suggested, throws fresh light on these big questions and on these bleak conclusions, and raises an entirely different and more hopeful interpretation of life.

“God’s initiative and his decisive intervention in this world through the life (and death) of Jesus Christ reveals the possibility that there is, in fact, meaning and direction to it all; there is a loving and purposeful mind behind it all.”

Furthermore, the two bishops said, the way in which those remarkable events transpired in Bethlehem suggest that, in God’s chosen means of intervention into this broken world, this child, himself, embraced the harsh realities of poverty, homelessness, political intrigue and refugee status in his first few weeks on earth.

“God’s initiative in Bethlehem – and the human response of those involved – can inspire in us today an understanding of life which is purposeful and loving, and can lead us to play our part in working courageously and compassionately to deal effectively with poverty, hunger, homelessness, loneliness and need of any kind.”

In his message, the Church of Ireland Archbishop of Dublin, the Most Revd Dr Michael Jackson warned that as never before, the Christians in the Middle East are “looking open-eyed at their own invisibility”.

He said their numbers on the ground have shrunk to “no more than a trace”.