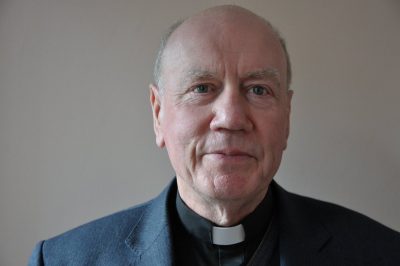 Monsignor Liam Kelly, Administrator of the Diocese of Kilmore.

The Administrator of the Diocese of Kilmore has expressed solidarity with Sinn Féin TD Martin Kenny whose car was burned in an arson attack at his home in Co Leitrim early on Monday morning.

The Sinn Féin politician had supported a proposal to accommodate asylum-seekers in Ballinamore, Co Leitrim.

Last week he received a death threat and intimidatory messages.

In Ballinamore, a group is currently staging a protest against a plan to accommodate asylum-seekers in the town.

In a statement on Tuesday, Monsignor Liam Kelly said the Sinn Féin politician had been “courageous in speaking out against racism”.

In his message, Mgr Kelly described the rise in racism, prejudice and religious intolerance, often fuelled by online hate-filled messages, as “deeply worrying”.

“There should be no place for such acts in a civilised society,” he said.

The church leader said, “All acts of violence and intimidation against people and property ultimately weakens society and demean us all.”

Mgr Kelly highlighted that welcome towards friend and stranger is at the heart of our Christian faith.

“Central to our faith is the belief that God lives in all human beings, no matter who they are or where they come from, and that when we reject others, we reject God who lives in them.”

“Hospitality has been part of our Christian tradition and it has been the practice of generations of Irish people to welcome everyone who came to their door and to share whatever they had with them.”

Elsewhere in his statement, Mgr Kelly said migrants, refugees and local communities – such as Ballinamore – “must be treated in a better way”.

Criticising the lack of consultation with the people of Ballinamore, he said that unless the method of consulting with local communities is changed, “it is likely that these issues will continue to arise across Ireland in the future”.

He stressed that the direct provision system in Ireland is not fit for purpose and must be changed.

“This system does not allow people sufficient independence to respect their dignity as human beings.”

“Migrants and refugees have been treated badly and communities like Ballinamore can be demonised. Leitrim people are warm, welcoming and friendly and the people of Ballinamore have been blind-sided because of the government’s failure to consult with them in advance and to listen to their views.”

He said that in the past Ballinamore community had welcomed refugees and would do so again “provided that there is prior consultation”.

Separately, the parish priest of Ballinamore, Fr Seán Mawn strongly criticised the attack on Deputy Martin Kenny’s car, describing it as a “despicable act which has no place in civilised society”.

Speaking to the Irish Times, Fr Mawn said he believed it was time to review the protest in Ballinamore and he highlighted that there had been “a certain anger and a certain annoyance” over the lack of consultation over the proposed number of asylum-seekers the government intended to accommodate in the Co Leitrim town.