“Church in Ireland is called to return to penance and prayer” 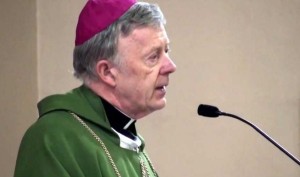 Reek Sunday pilgrims have been challenged in their faith, just as they are being challenged physically by the rough slopes of Croagh Patrick.

Archbishop Dr Michael Neary and Bishop Fintan Monahan of Killaloe are among the thousands of pilgrims climbing Croagh Patrick today, a pilgrimage that has been undertaken for over 1,500 years.

During Reek Sunday, Mass will be celebrated at the summit of the mountain every hour, beginning at 8am, with the final Mass commencing at 2pm.

Pilgrims may also take part in the Sacrament of Confession from 7.30am to 2pm.

In his homily, Archbishop Neary acknowledged, “We are very conscious of the slow, silent decline of faith in Ireland. Many feel they are ‘strangers in a strange land’. Pilgrimages provide an opportunity to take stock but also a time to discover new heart.”

While the arduous pilgrimage was long seen as one of the acid tests of continuing practice throughout the country, it was always far more than that, the Archbishop of Tuam said.

“It was never simply a communal celebration of the status quo. Its uncompromising and inhospitable terrain cut through all groupthink and sentimentality and roughly summoned the individual believer back to the absolute rock bottom, the ground zero of his or her experience.”

He reminded pilgrims to be questioned by their faith. “We need that encounter as never before, as individuals and as Church,” he said.

Archbishop Neary lamented that the educational system “makes fewer and fewer bones about the socio-economic goals of learning, and there is less and less value placed on knowledge for its own sake and wisdom as an end in education”.

He added, “The questions are also of the short and medium term. Where? When? How? There is little patience for the questions of ‘Why?’”

He said it would be easy, as Church, to avoid the long, hard personal journey. “To spend all of our remaining energy on desperately vying for the attention of this culture. Grabbing any chance to speak to society as a whole. To address the nation from any pulpit at which it will now briefly gather.”

But he stressed that before talking, the Church must ensure it has something to say. “No prophet goes to the people without having first listened to God.”

Archbishop Neary underlined that the Church in Ireland still has a special calling today. “To return, for the umpteenth time in the repeated ebb and flow of its long history, to penance and prayer”. To begin yet again that historical process of Christian discernment which has at its heart the attitude of listening “to what the Spirit is saying to the churches”.

Could it be that we yet have our best work to do? he asked. He suggested that this work will be done by a small, socially and politically peripheral and poorer Church. Such a Church would be one which has rediscovered through adversity the honesty and authenticity of the suffering servant, the prophet, the abandoned Messiah.

“A Church which has rediscovered its own ancient wisdom and which places God first, confident that all will then be well.”

The senior bishop said that just as once church leaders were consulted and heard in the most powerful circles, “now we must get used to preaching on street corners and making the Gospel heard over the incessant hubbub of the public square”.

He concluded that the Church must “subvert the closed shop that is the modern, western world view … and startle that careful, calculating world with the unaccounting largesse, the generosity, the hospitality of God”.

Pilgrims were also invited to keep families and the World Meeting of Families in their prayers, ahead of the papal visit in August.

Croagh Patrick (2,510ft/765m) is Ireland’s holy mountain. It dominates the landscape of south-west Mayo both spiritually and physically.

The pilgrimage is associated with St Patrick who, in the year 441, spent 40 days and nights fasting on the summit, following the example of Christ and Moses.

The name “Reek Sunday” comes from Patrick’s ability to Christianise many pagan customs including the festival of Lughnasa, which previously had heralded the start of the harvest festival honouring the ancient pagan god Lugh. Lugh’s name is encompassed in the Irish word for August: Lughnasa.