Home > News > Church must adapt to change with vision & courage

Church must adapt to change with vision & courage 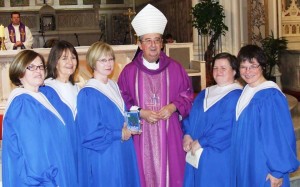 Archbishop Diarmuid Martin and members of the Deaf Choir

The Church needs to be able to respond more effectively to change Archbishop Diarmuid Martin of Dublin has said as he warned that inertia doesn’t mean things can go on as they were.

At a Mass on Sunday to mark the 170th anniversary of the Catholic Institute for the Deaf (1845-2015) the Archbishop said, “Times have changed in Irish society and the Church must change.”

But he underlined that the Church must change, not to go along with society or to opt out of society, but to find the best space possible to be “free and unencumbered” to bring the challenging message of Jesus Christ to society.

Recalling his comments after the passing of the referendum on same sex marriage, where he spoke of the Church’s need for “reality check”, he said, “I could also have said ‘a wake-up call’.”

Referring to the Catholic Institute for the Deaf’s anniversary, he said it was an opportunity to look at what has happened and what has been achieved and what should not have happened.

“When we reflect on this history of this Institute, we have to remember that that history was marked over the years also by dark moments in which the cry of children was not heard, betraying the message of Jesus.”

The Church must free itself and become unencumbered even from positions which may in the past have been positive and useful to both Church and society, including in the control of schools and institutions, the Archbishop said.

Referring to Sunday’s readings, he said that when the Church becomes trapped into a logic of looking after its own privilege and power first, then a situation arises very quickly in which nothing else counts.

But the Christian celebrates by looking forward and by praying and allowing the healing power of Jesus to change hearts.

“We should be grateful to a new generation of deaf people who are responding to that call today, despite the many challenges they still meet.”

After Mass, a talk was given on the life of Mgr William Yore, the Dublin priest responsible for the establishment of the Catholic Institute for Deaf People.

In his homily, the Archbishop described the priest as “extraordinary” and “a giant of a man” who had lived through the “challenging period of the emergence of the Catholic community from political social and religious exclusion”.

An exhibition at a new heritage centre was launched on Sunday.

Mgr Yore was also involved in the building of the parish of St Paul’s on Arran Quay; for inviting the Vincentian Fathers to Phibsborough and the creation of Glasnevin Cemetery and he also organised the funeral of Daniel O’Connell in Glasnevin.

“We have to remember that at the time there was absolutely nothing available to help young deaf men and women. There was no health care service, no social services. For young deaf people who were also poor, they were simply marginalised and excluded,” the Archbishop said.

He explained that Mgr Yore sold his own collection of books to establish the new Institute where young deaf boys and girls could get basic schooling and were prepared to enter more fully into the life of society.