Church in England and Wales to target lapsed Catholics 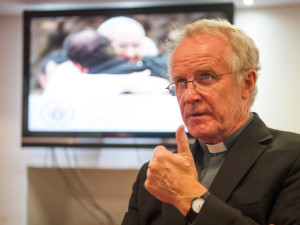 The Catholic Church in England and Wales has launched a ‘home mission’ campaign to attract some of the estimated four million lapsed Catholics back to Mass.

Rev Kieran Conry, Chair of the Bishops’ Department for Evangelisation and Catechesis, has called on every parish to prioritise reaching out to those who rarely or never attend Mass.

“While the lapsation of baptised is not new within the Catholic community, the worry and anxiety experienced by parents, siblings and grandparents of non-churchgoing baptised, is deep and heartfelt. We all hold in our hearts at least one person in our family who seems disconnected from the life of the Church,” he said.

The Bishop is encouraging active churchgoers to use leaflets and other promotional materials to invite those closest to them to re-connect with their faith and their local parish.

“If there are people who want to come into our Catholic churches, I would say that you are most welcome. I am sure that there are people who lost contact with the Church long ago, and now, with all the changes that have happened, might feel too shy to come back in, afraid to embarrass themselves by doing the wrong thing. I would say to them, don’t worry, come in and see,”  Bishop Conry said.

Home Mission Sunday will be celebrated on 15 September in England and Wales as an annual day of prayer and celebration for the work of evangelisation.

This year’s theme is ‘Crossing the Threshold: Ministry and Outreach to non-churchgoing Catholics’.

Over 400,000 campaign leaflets have been distributed covering every parish and religious house. This area of the Church’s work has been chosen in response to requests from all tiers of the Catholic community for it to be resourced and prioritised.

Speaking about the initiative, Archbishop Vincent Nichols, President of the Catholic Bishops’ Conference of England and Wales, said, “When we are seen to act in this manner of Jesus, then we may well make others wonder, at least a little, why we do so. We should be ever ready to put into words, simply and directly, the reasons for our behaviour.”

He urged people to ‘Cross the Threshold’ by reaching out to those closest to them and to the stranger and to those most in need of help.

Several initiatives are already underway. These include the establishment of a national core group for ministry and outreach to non-churchgoing Catholics; they will tour the five church ‘provinces’ of England and Wales; new ‘Films of Faith’ video materials which feature former non-churchgoing Catholics; a research project which will explore how parents who send children to Catholic schools can connect with parish life; the publication online of free resources to support parish outreach; and a parish-based pilot project underway in Nottingham Diocese.

By Lent 2014, resources will be provided to support people to seek and receive the Sacrament of Reconciliation (Confession).

An informal telephone survey of 22 cathedrals about confession was conducted in August 2013. The respondents were cathedral deans, priests-in-residence, or designated staff members.

There was a 91% response rate. 65% of the cathedrals surveyed report an increase in confessions heard because of the ‘Papal effect’, ie the Benedict visit and/ or the inauguration of Pope Francis or both.

35% reported no increase but said there was no decline using the words ‘steady’ or ‘normal’.  “There is definitely an increase in lapsed seeking confession since the election of Pope Francis,” said one respondent.

Another trend reported is that people do not know what to say in confession as it may have been 20 -30 years since their last confession. Another respondent said, “People seem to have a fear about the formula of prayers to say and so priests try to put people at ease.”

Respondents noted an increase in younger adults going to confession. Westminster Cathedral is unusual as there is nearly always a queue for confession. This is due to its position in central London, and the fact that it serves a large number of workers and tourists for whom the cathedral is not their parish.

In a normal week, there is always a priest hearing confessions adding up to around 45 hours per week. In Holy Week this year, 45 hours of confessions with several priests on duty represented 103 priest-hours but this was nowhere near enough to cope with demand.