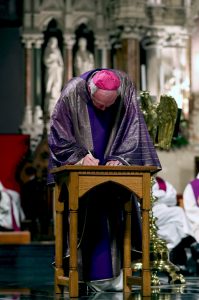 The Church is now much better placed to meet the future than it was in the past. This is according to Bishop of Limerick Brendan Leahy, who spoke on the publication of a pastoral plan following a synod in the diocese.

The plan states that a leadership that depends almost exclusively on the priest cannot continue. It recommends that a working group on the leadership role for women in the diocese be established next spring.

Lay led liturgies of the Word, including Good Friday ceremonies; prayers for the dead and reception of remains at funerals; child-friendly spaces in churches and ‘play and pray’ during Masses; as well as equipping each parish church with modern technology, are among other recommendations.

There are 90 recommendations in the ‘Moving Forward Together in Hope’ pastoral plan, which the Bishop said is only the beginning.

“[We] still have a long way to go. As Pope Francis says, it’s not just an era of change that we are in, it’s a change of era. We must change with it and create a Church that is more ready and better prepared to meet the future than we have the past,” he said.

He added that the coming together of clergy and laity to work out a pathway for the diocese was a “participative experience” in which they had looked together at challenges and opportunities involved in creating a more inclusive Church.

“We are moving in the right direction,” he said. The recommendations will be implemented over the 10-year lifespan of the plan, with some initiatives already under way. 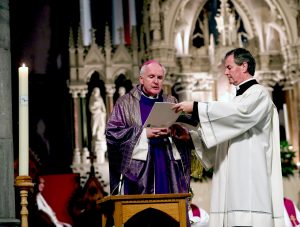 Under the ‘Community and Sense of Belonging’ theme, initiatives include everything from the ‘cup of tea’/hospitality after Mass to lay parish teams visiting homes, hospitals and nursing homes. Welcoming groups are to be established to give newcomers to areas an immediate sense of belonging. A new emphasis is to be put on the Family Mass and on parishes examining how they can make a difference to safeguarding the planet.

Under ‘Pastoral Care of the Family’, the diocese is to network with other community groups and agencies to ensure a more inclusive Church in Limerick. A group will also be established in the spring at diocesan level comprising people who are aware of issues facing people on the margins. This group will focus on people hurt by the Church.

There will also be a focus on mental health, including engagement with people who are homeless, prisoners, travellers and others, and encouraging a true missionary Church.

Under the ‘Young People’ theme, the diocese is to introduce a volunteer youth ministry leaders’ training programme and a pilot programme of John Paul II awards. The use of music as a means of engaging young people in Church and liturgy will be explored, as will the establishment of Youth Cafés and developing ties between Church and local youth groups, including sport and culture groups.

Under ‘Liturgy and Life’, parish volunteers are to be trained to lead liturgies in the Limerick diocese on designated dates when priests are not available. Two representatives have been assigned for liturgy training in Maynooth. There’s also an intention for more general and imaginative use of the second rite of confession.

Under ‘Faith Formation and Education’, recommendations range from enhancing children’s sacramental preparation to helping adults who have had positive experiences tell their story. There will be a Sunday School model for children and a faith development strategy specially for adults, as well as an evaluation of existing catechesis and religious education of young people.

Creative ways to engage with people – such as a ‘Mission with a Difference’, a ‘festival of faith’ with open air events – will take place from 2018 onwards.

With regard to Catholic schools, home-school-parish links will be developed, as will a parish programme for children’s sacramental preparation. Secondary schools will be encouraged to engage with the Catholic Schools Partnership’s process titled ‘Understanding and Living the Ethos in a Catholic Voluntary Secondary School.’ Third level education will be engaged through the chaplaincy team.

Under the sixth and final theme, ‘New Models of Leadership’, additional leadership roles will be explored including the role for women in the diocese. 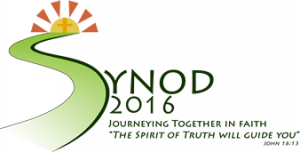 The diocese of Limerick is to redouble efforts to encourage vocations to the priesthood and religious life by establishing a forum to promote vocations. Separately also, it will establish a working group to examine its current communications structures.

In April 2016 Limerick held what was described as the first Irish synod in half a century and the first ever with such major participation of lay women and men. It included 400 delegates considering 100 proposals.