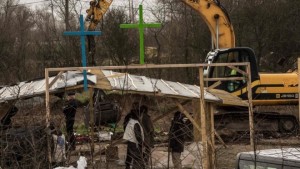 A play at the Edinburgh Fringe Festival highlighting the plight of a refugee in the Calais ‘Jungle’ is in the running for two national awards in the UK.

‘Still Here’ by Rachel Partington, Artistic Director of Theatre for Justice and a student at the Bristol Old Vic Theatre School, has been shortlisted by National Student Drama Festival for its Edinburgh Award 2016 and also longlisted by Amnesty International for its Freedom of Expression Award 2016.

The play is sponsored by the Church of England – the first time the Church has ever sponsored a production at the Edinburgh Fringe Festival – and is being performed in the grounds of St Mary’s Cathedral in Edinburgh.

‘Still Here’ is new verbatim play based on the experiences of an Eritrean refugee from interviews conducted in the Calais Jungle in December 2015,

The production draws on the talent of both cast and creatives from the Bristol Old Vic Theatre School.

Speaking about the play Rachel Partington said, “After my visit to Calais I was determined that this man’s story must be heard and that these people must not be forgotten.”

“Our vision for the show is to take to places where it could have real influence and we believe that Edinburgh is one of them. We hope that the Fringe will open doors to take the piece beyond, where it has the potential to move the hearts of those in power to further action.”

Rev Arun Arora, Director of Communications for the Church of England said, “We are delighted for Rachel, the cast and the crew for their achievement of being in the running for two national awards.”

“It is a privilege to sponsor and support a play that deals so powerfully and skilfully with one man’s journey of faith and flight. We share with Rachel a responsibility to speak up for the poor and the marginalised – for people of all faiths and none – and this play is a powerful and creative away of doing just that.”

The results of both awards will be announced at the end of the Fringe Festival.

More information about the play can be found at: http://www.theatreforjustice.com/

The play is being performed until August 24 at the Edinburgh Festival Fringe at ZOO @ St Mary’s South Lawn.