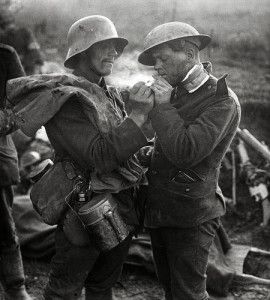 Two ‘Christmas Truce Concerts’ which commemorate the story of the World War I’s 1914 Christmas truce will take place in Dublin and Derry this weekend.

The concerts will mark the beginning of a major WWI ‘Peace Field Project’ in Flanders which Derry man Don Mullan has been developing over the past five years.

The well known writer and peace campaigner has been working under the patronage of Archbishop Desmond Tutu and Brazilian soccer icon Pelé and the project has captured the attention of the United Nations and major diplomatic missions from around the world.

Amongst the initiatives being spearheaded by the Derryman is the creation of a ‘Flanders Peace Field,’ commemorating the game of football played by British and German soldiers on Christmas Day 1914.

There is also a Christmas Truce carol and folk festival, with satellite concerts around the world; an international Christmas Truce lecture; a multi-faith gathering in Messines, Flanders, on 6 December 2014, as well as exhibitions, publications, documentaries and theatrical productions.

The Belgium Federal Commissioner-General with responsibility for WWI commemorations, Paul Breyne, has described Mullan’s initiatives as ‘one of the best projects to come before the Belgian authorities concerning WWI commemorations.’

Mullan has developed his initiative with the town of Messines, St Nicholas Church, Messines, and the Messines Peace Village and has recently teamed up with the Derry Playhouse to develop a major Irish dimension to the project with the support of the Irish Government’s Reconciliation Fund.

The concerts, which will formally mark the beginning of the project, will reflect in form and content the lessons to be learnt from war.

Set up in the aftermath of the Omagh bomb, the Omagh-Waterford Peace Choir have played throughout Ireland and beyond, promoting their message of peace and reconciliation through their music.

“On Christmas Eve 1914, as darkness descended upon a desolate and brutal landscape of barbed wire and decaying corpses, the sound of singing voices filled the space between where, just hours before, bullets and shells had been fired with deadly intent,” organiser Don Mullan said.

“Soldiers on both sides, many of whom were teenage boys, looked across ‘No Man’s Land’ and momentarily recognised a common brotherhood in humanity. German, British, Irish, French and Belgians all longed to be back home with their families on this, the first Christmas of the war.

“Fellow feelings of kindness, comradeship and sympathy were awakened as soldiers tentatively walked across Flanders Fields to embrace one another. What transpired was, as the British historian, Piers Brendon, remarked: ‘… what must be the most extraordinary celebration of Christmas since those notable goings-on in Bethlehem.’ ”

Mullan wants people today to remember with solemn dignity and respect the millions of soldiers and civilians who died during World War I and in all conflicts throughout the world.

“Let us embrace our common humanity and recognise that true and lasting peace will only be established when we share the earth’s resources with justice and fairness, determined to leave no human being cold and hungry.”

The two concerts are taking place in Christchurch Cathedral Dublin on Saturday 7 December at 8pm and St Columb’s Cathedral Derry on Sunday 8 at 3.30pm.

The concerts will movingly celebrate the story of the 1914 Christmas Truce in poetry prose and song. The voices of soldiers who participated in the truce will be heard through readings by Derry Playhouse members.

Along with the  Omagh–Waterford Peace Choir and special guest singers they will commemorate  Christmas Eve 1914 when singing voices momentarily silenced the guns of World War I and ordinary soldiers and officers crossed No Man’s Land to engage in one of the most remarkable events of human history.

Tickets are €10 and £5 and are available from Christ Church Cathedral, Dublin on (01) 677 8099 or online at: http://entertainment.ie/tickets/christ-church-cathedral-dublin.asp and The Playhouse Box Office, Derry, on (028)71268027 or online at www.derryplayhouse.co.uk.