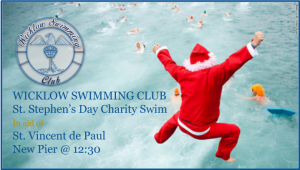 One Christmas tradition that has been gaining popularity in recent years is a festive dip in the sea or a lake on Christmas Day or St Stephen’s Day. But while these polar plunges are great community events, full of fun and often raise money for charities and good causes, those who are not used to swimming in very frigid waters are being advised by the lifeboat and coastguard services to take special care when entering the water.

“Christmas Day swims are a popular pursuit and we would urge the public to only participate in organised swims where medical support and lifeguards are available,” said Irish Coastguard operations manager Gerry O’Flynn.

There are at least 20 organised outdoor swims held in Ireland over the festive season. Locations include: Carlingford, Co Louth; Annagh Lough, Co Cavan; Clontarf, Skerries and the 40 Foot in Dublin; the New Pier in Wicklow harbour; Rosslare in Co Wexford; Gullamene and Kilmurran Cove in Co Waterford; Myrtleville in Co Cork; Derrynane and Fenit in Co Kerry;  Kilkee and Kerin’s Hole in Co Clare; Blackrock and Inis Mór in Co Galway; Lough Lannagh and Belmullet in Co Mayo; Rosses Point in Sligo; and Bundoran and Culdaff in Co Donegal.

Most of these are held at midday on Christmas Day, but there are exceptions. The Wicklow swim, which this year is in aid of the Society of St Vincent de Paul, is held at 12.30pm on St Stephen’s Day and the Culdaff swim is at 2.30pm on New Year’s Day. So if you do want to join in the fun, check with local swimmers what time any event near you is taking place or do a bit of research on the internet beforehand. Note that the Christmas Day swim in An Cheathrú Rua (Carraroe) in Co Galway has been cancelled because of a bereavement.

If you are  not used to open water swimming at this time of year, you should enter the water gradually rather than jumping or diving straight in, says Gareth Morrisey of the RNLI. One reason for this is that the shock of the cold triggers a gasping reflex and if you are unready for this you can easily draw water into your lungs. “Take your time to slowly walk into the sea to allow your body time to acclimatise,” he cautions. “Stay in the shallow water when you first go in to reduce the severity of cold water shock.”

Indeed, if you are out for a walk by a river or the sea and slip or fall in, you should follow the RNLI’s FLOAT message says Gareth.  “People follow the same instinct when in cold water – they gasp, thrash about and swim hard. But this increases chances of water entering your lungs and increases strain on your heart.

“If this happens, fight your instinct and float. The initial shock will pass quite quickly within 60–90 seconds and when you have regained control of your breathing, you can then try swimming to safety or calling for help. You’ll have a far better chance of staying alive.

“If you see someone in trouble in the water, fight the instinct to go in yourself. Call 999 or 112 and ask for the Coast Guard.”

Seperately, at midday yesterday, Christmas Eve, Dún Laoghaire RNLI, were due to hold their annual commemoration of those who lost their lives at sea. The ceremony at the East Pier features the laying of wreaths at sea, and this year the helicopter crew of Rescue 116 were especially remembered in the prayers of those at the gathering.