Every 5 minutes a Christian dies in the Middle East 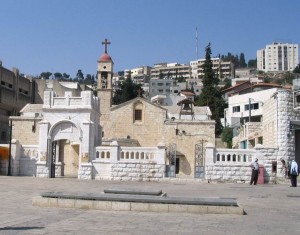 Every five minutes a Christian dies in the Middle East according to Fr Gabriel Nadaf, who lives in Nazareth.

A priest of the Greek Orthodox Church, he feels that in spite of death threats to himself, he has to publicise the difficulties Christians face in the region.

Fr Nadaf has 24-hour security provided by the Israeli authorities because of threats arising from his efforts to highlight the situation.

In an interview with CNA he said, “I have been screaming this for years while the world remains silent.”

He said the region where faith was born is being “emptied” of Christians.

Others including Pope Francis have drawn attention to the issue in recent months.

Aid to Church in Need in its “Religious Freedom Report 2014” states that Muslim countries predominate the list of states with the most serious religious freedom violations.

The report, which covers a period from 2012 – 2014, states that global religious freedom has entered a period of ‘serious decline’.

Of 20 countries designated ‘high’ with regard to lack of religious freedoms, 14 experienced persecution linked to extremist Islam.

The reports states that Christians are the most persecuted religious minority. However, Muslims are also persecuted by Muslims and authoritarian governments. Persecution of Jews in Western Europe has also increased but is considered ‘low’ level.

Fr Nadaf said that Israel is one of the only Middle Eastern countries where Christians can live safely, despite being a minority.

“In Israel, Christians are not killed, their churches are not burned, their female believers are not raped.” Christians must stay in Israel in order to strengthen their presence in the Middle East, he said.

Israel has a population which includes some 6 million Jews, 1.3 million Muslims and 160,000 Christians.

Another religious leader in another country, the Syriac Catholic Patriarch has stated that the West ignores Iraq’s Christians because they represent no economic interest.

“They used to live normally, they had their homes, their jobs, their church and they have become, through no fault of their own, just because they were Christians, refugees in their own country, without resources. We are going through a very, very tragic time,” said Patriarch Joseph III Younan of Antioch and All the East.

In an interview with Aid to the Church in Need, he said that the Western world had been largely silent about the situation facing Christians in northern Iraq.

On the situation of displaced Christian families in Kurdistan, the Patriarch said that their “morale has fallen very low. For months refugees have been living in this humanly unbearable situation – they have absolutely nothing. Winter has begun, and they don’t have help from humanitarian agencies, and sometimes they feel humiliated.”

Patriarch Younan stressed that the region cannot provide for the needs of all the estimated 140,000 Christians who have been displaced, and who need housing, food, medical care, and education.

The Catholic Bishops’ Emergency Committee in Iraq has been addressing many of these needs.

They have provided food and shelter, via a Committee — supported by a number Catholic agencies and charities in the US — which is now putting in place longer-term projects, including the construction of schools.

A number of Iraqi refugees have made their way to other countries in the Middle East, such as Lebanon where there are an estimated 8,000 Iraqi Christian refugees.

This total includes Iraqis who fled before the current crisis sparked by the emergence of ISIS. Patriarch Younan called on the “international family of nations” to take concrete steps to provide justice to refugees so that they can return home safely.