Home > News > Christians are called to be people who treasure life

Christians are called to be people who treasure life 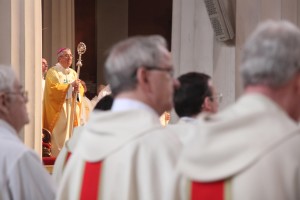 As believers in the risen Christ, Christians are called to be at the forefront of the transformation of human existence, Archbishop Diarmuid Martin has said.

In his Easter homily at St Mary’s Pro Cathedral, the Primate of Ireland said that when we realise that human life is to be transformed, then we have to be in the forefront in rejecting anything that degrades humankind.

“To be indifferent to what degrades even a single one of our brothers and sisters is to deride what resurrection is telling us,” he stated.

The Archbishop underlined that faith in the resurrection is not an opting out of the challenges which we encounter in our world, leaving everything to eventual rewards in the next life.

“Resurrection means that Jesus is with us now; he not just waiting somewhere for us in some unknown future,” he said.

“There is the horror of the trafficking and exploitation of men, women and children, for economic reasons, for sexual gratification and for personal satisfaction.”

“There is a world in which harsh poverty still exists parallel to a world of wealth and indifference. Christians are called to be men and women who treasure life in the depth of its meaning and not in the superficial satisfactions which society often offers.” 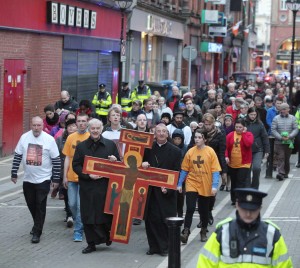 He added that Christians are called to be men and women who treasure life in the depth of its meaning and thus be leaders in the fight for human dignity.

The Archbishop reminded his congregation that every human life has its value. “Every apparently failed human life maintains its value and the Christian must be a witness and a beam of light and hope for those who have lost that hope and no longer see light in their future or are attracted to the temptation of bright lights on the wrong roads,” he commented.

He added that the resurrection is a sign of life and hope for all, even in a world where the message of Jesus is not understood or indeed is subject to hostility.

“Sadly in our world a frightening hostility to those who espouse that light often appears.”

“I cannot celebrate the light of Christ this night without thinking of those students in Kenya who were singled out one by one to be killed precisely because of their Christian identity.”

“I think of the horrors being carried out against Christians by groups such as Boko Haram.”

“I think of all Christian believers who have to celebrate this Christian festival of Easter light in the deepest of darkness.”

For the faithful, the Archbishop also had a message, reminding them that the light of Christ has been distorted over history also by Christian believers themselves through their sinfulness, uncaring, intolerance or desire to impose and to dominate.

“But the light is of the Christian message is constantly being rekindled in the hearts of believers by the light of the resurrection, just as this evening the light of Christ appeared in our midst as one single light shining alone in the darkness of this Cathedral.  Now it has burst out into the brilliance of a celebration of new life,” he said.