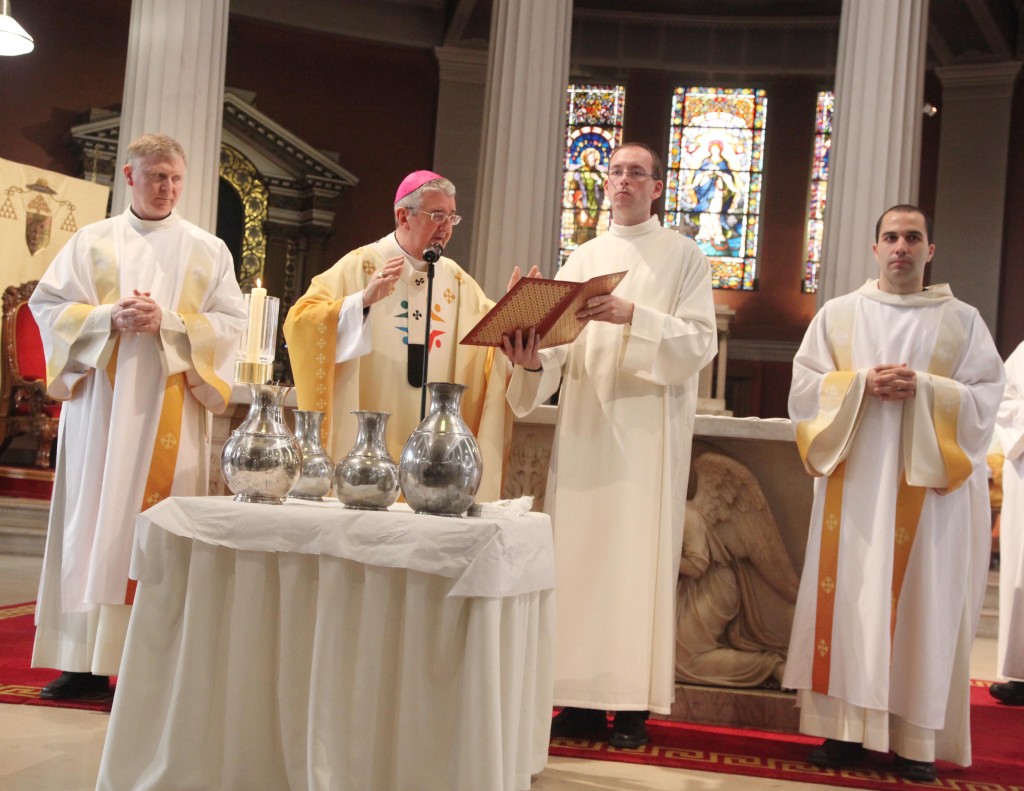 Archbishop Diarmuid Martin of Dublin has reminded his priests and lay faithful that priestly ordination is not just the conferring of a professional qualification but a sacred calling.

In his homily for the Chrism Mass on Holy Thursday, the Archbishop told a packed Pro Cathedral in Dublin that priestly ordination is “an anointing and a consecration not for personal privilege, but for service.”

He described vocation to the priesthood as “a consecration and a configuration with Christ the High Priest and a call for us to emulate the holiness of Christ himself.”

Explaining the significance of the Chrism Mass for priests, Archbishop Martin said priests are called in the Eucharist to renew the commitments they made at the time of their ordination.

“We must never lose that sense of idealism and dedication,” he exhorted the priests assembled for the Mass on Thursday.

Dr Martin also paid tribute to older priests who have experienced “rapid and deep social change on many occasions during their life, yet who still remain fresh and continually renewed and indeed personally happy in their commitment and their understanding of ministry.”

Commending their personal dedication, he said it had never diminished.

“Many things have changed in the Church and in society since each of us was ordained. For those of my age and older the social image and position of the priest has changed enormously.”

He urged priests whose ministry has been difficult, or who experience anxieties and even failure, not to fall into the trap of thinking that they are on their own.

“All of us are sinners; all of us have our weaknesses; all of us have failed; none of us lives in a world where the black and white of good and evil, of success and failure, are clearly and distantly separated,” he warned.

Elsewhere in his homily, the Archbishop said confession is “greatly misunderstood both within and outside the church.”

The Archbishop took issue with a cartoon in the Irish Times on Wednesday, saying many priests and people had felt hurt by it.

The cartoon depicts three singing priests in front of a confessional one of whom holds a copy of the Children First Bill.

The trio appear to be singing “I won’t do that” in response to the mandatory reporting requirement for clerics.

“I am a strong believer in freedom of speech and of the vital role of satire in social criticism, but I object to anything that would unjustly tarnish all good priests with the unpardonable actions of some,” the Archbishop rebuked.

In an affirmation of his clergy, Dr Martin stated that there are “great priests in the Archdiocese of Dublin.”

The Children First Bill makes the reporting of child sexual abuse or concerns about it mandatory for clergy as well as other professionals dealing with children.

Some priests have expressed concern that the terms of the bill, taken in conjunction with the Criminal Justice (Withholding of Information on Offences against Children and Vulnerable Persons) Act, obligate catholic priests to break the seal of confession if someone confesses abuse in the confessional.

Fr Gearoid O’Donnchu, a retired parish priest in the diocese of Kerry, stated publicly this week that he will not break the seal of confession.

He told Newstalk, “If somebody comes to confession it is with the understanding that what they say is entirely privileged. The seal of confession takes precedence over everything, even my own safety.”

However, according to Martin Long of the Catholic Communications Office in Maynooth, the seal of confession is “inviolable” and he added that this recognised and protected in many jurisdictions including Ireland.

“Mandatory reporting of allegations of child abuse has been church policy in Ireland since 1996, and in that regard, the Government’s new legislation is welcome,” he told CatholicIreland.net.

Elsewhere, Bishop Donal McKeown of Derry said priests were “launching out into new and uncharted waters” and that some younger priests wondered how they will cope in the future with extra work and fewer colleagues.

In his homily for the Chrism Mass in St Eugene’s cathedral in Derry, Bishop McKeown warned, “The current service model of providing masses, funerals, baptism and blessings on demand is not going to be possible into the future.”

“A Church that seems to prioritise the welfare of the pious and the well-off will not bear witness to the Jesus who died on the Cross,” the Bishop of Derry observed.

He said Pope Francis had given the faithful permission to acknowledge that the Church needs to be rebuilt. “Not just repainted or tinkered with – but rebuilt.”

He said Catholics live in a world which, in many places, no longer speaks or understands the language about God.

“The vocabulary of so many of our contemporaries is formed, not by Church but by popular culture. And the world, whose imagination is pickled in the language of silky shampoos, celebrities and salvation by self-indulgence, does not understand words like sin, salvation, sacrifice or sacrament.”

In this context, Pope Francis was calling the faithful to be a missionary Church, as Pope John Paul II in Ireland 35 years ago said, “to go out to our generation as if it were a new continent to be conquered for Christ.”

“But if our new circumstances mean that priesthood will have to let itself be remade in the potter’s hands, then that also means that our parishes will have to evolve in this new missionary Church.”

He said the Church would have to move away from a customer model where most of the lay faithful were periodic consumers of the religious services provided by often over-stretched clergy. “That is not a sustainable way forward,” he underlined.

That confidence in the Lord’s power gives us the freedom not to be afraid of looking forward rather than back and hankering after some mythical Golden Age in the past, he added.

In Tuam, Archbishop Michael Neary said priests were ministering in a fractured world at times as men who “are ourselves disillusioned and disheartened.”

He said priests endeavoured “to hear the silent cry of our people, share their distress, bring comfort and dignity to the deprived.”