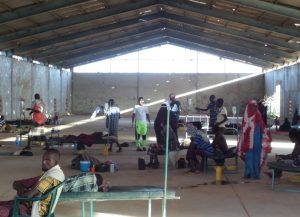 Cholera had broken out in Somalia at a time when the African country faces famine and hunger.

Abdi Tari Ali, a doctor who manages the Trócaire Somalia Programme, has been in the Gedo region of Somalia, where he helped the overworked staff.

“Staff are working 24-hour shifts to save lives,” he said. “We have two challenges: cholera and hunger. If the long rains don’t come in April, it will be a catastrophe.”

The current drought, one of the worst that anyone can remember, is more severe and protracted than those which occurred in 2011, when over quarter of a million people died.

Drought has destroyed crops, and villages are without water. Farmers’ animals are unable to survive without water and the farmers have no income. If they start to move to find something better, many end up in camps for the internally displaced, with borders closed.

Trócaire has been in the Gedo region for 25 years and provides health, nutrition and education, supporting three hospitals, ten primary health units and four health centres. In recent times Trócaire has been treating sick children who are malnourished and have diarrhoea or respiratory infections. 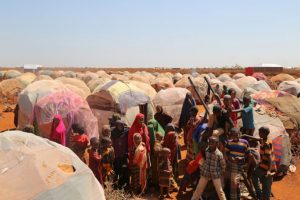 Cholera cases are increasing every day, because conditions in the camps are unhygienic, there is poor water supply, and people arrive already weak from hunger. One case of cholera can infect a whole camp or village quickly. Trócaire  has established two cholera treatment centres, where people receive rehydration and antibiotics.

“Cholera is easy to treat, but they need to reach us. People are being carried on stretchers or camels 20 km. You don’t know how many have died on the way,” Abdi Tari Ali said in a Trócaire article. “If the patient doesn’t get assistance in six hours, you lose them – 100 per cent. Children die even quicker. ”

There are 30 beds, which is not enough for the hundreds of cases. Trócaire’s partner organisation, Catholic Relief Services (CRS), is providing food aid. This involves transferring money via mobile phone, allowing those affected by food and water shortages to stay where they are and buy food and water.

The agency is also helping to install water points and repair boreholes and wells to enable people to stay in their villages.

“We have been able to mobilise at-hand resources quickly, but the situation will require a sustained response for which we greatly appreciate your efforts,” says Lane Bunkers, CRS country representative for Kenya and Somalia.

The Caritas confederation of Catholic aid organisations, of which Trócaire is part, plans to scale up its response to the food crisis and cholera outbreak.

The United Nations (UN) reported that on 16 March 2017, the government of Somalia launched an oral cholera vaccination (OCV) campaign with the support of the UN health agency, targeting over 450,000 people in seven high-risk areas around the country.

The first ever OCV campaign to be conducted in the country comes at a critical time after Somalia announced the ongoing drought a national disaster, with the country facing the possibility of another famine, according to the World Health Organization (WHO).

Somalia has a large-scale outbreak of cholera, with roughly 11,000 cases and 268 deaths reported in 11 regions since the beginning of 2017. This is more than half the number of cases reported for 2016.