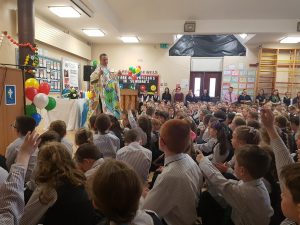 Pupils in St Ronan’s, Newry, praying for the mission of the church and praying for children less fortunate. (Photo: WMI)

Children at Catholic schools across Ireland prayed for their peers across the globe yesterday as part of the Children’s Day of Mission Prayer.

The event, which included prayer and other mission-related activities, was organised in Ireland by the Society of Missionary Children. National secretary Julieann Moran said it was a great success.

“I was at a great school Mass at St Ronan’s Primary School in Newry and the singing was terrific. Fr Colum Murphy was the chief celebrant. He was on the Maynooth Mission Outreach programme and it was great for the kids to hear his mission experiences.

“Fr Colum also wore a replica of the vestments that were presented to Pope Francis when he arrived on the tarmac at Dublin Airport.”

Those vestments were based on the winning design in a school art competition that had more than 4,500 entrants.

Ms Moran said she was delighted with the reports she received from schools across the country about the day. “There has been some great art work this year,” she said. “In St Ronan’s, there was a lot of art about the Rosary, and it was fantastic.

“This is the third year in a row that the national office has been out of Dublin for the Children’s Day of Mission Prayer. Last year we were at Carlow Cathedral. This year, one of the reasons we came to St Ronan’s is that they have been so good to us for so many years.”

Encouraging children to pray for other children is a key part of the work of the Society of Missionary Children, one of four pontifical missionary societies that fall directly under the Pope’s sole authority.

Founded in France in 1843, the pontifical society has been active in Ireland since 1853. Elsewhere in the world, it is known as the Missionary Childhood Association and the Association of the Holy Childhood.

The three other Pontifical Mission Societies are the Society for the Propagation of the Faith (Propagandum Fidei), the Society of St Peter the Apostle and the Missionary Union of Priests and Religous. In Ireland, the four societies are organised under the umbrella World Missions Ireland. 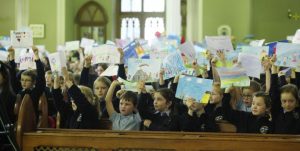 This is the 11th year the annual Children’s Day of Mission Prayer has been held in Ireland.

“Our motto is ‘Children helping children’,” said Ms Moran. “But as well as children offering real practical help, including making donations out of their pocket money, we also get children in Ireland to pray for one another. That two-fold support is so important. Prayer creates a connection between children across the globe, it creates a connection between people who will never meet. That is very powerful.”

Other mission-related events taking place in Ireland this month include a Mass of thanksgiving for missionaries and their supporters on 27th October at St Mary’s, Rathmines; and, for the third year in a row, Miles for Mission, a fundraising 5km fun run in the Phoenix Park on 25th October.

Mission Sunday will be held on 28th October.