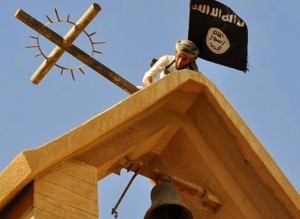 Islamic State militants killed four children in the Iraqi city of Mosul when they blew up an ancient Christian church known as the Mother of Aid.

According to Saeed Mamuzini, communications officer of the Mosul branch of the Kurdistan Democratic Party (PDK), the four children were near the church at the time of its destruction.

He said the church, which belongs to the Chaldean Catholic Church and is located in the centre of Mosul, dates from the earliest centuries of Christianity.

As they imposed their rule, they forced thousands of the 60,000-strong Christian population in the Sunni-majority city to flee.

As many as 74 children are reported to have been killed by ISIS since their takeover.

Christians’ properties have been confiscated and daubed with the letter N for ‘nasrani’, while numerous churches have been blown up.

Last July, the jihadists destroyed a 1,800-year-old Assyrian Christian church, as well as the tomb of the Prophet Jonah.

St Ephrem’s Cathedral, which was once the seat of the Syriac Orthodox Archdiocese in Mosul, currently serves as an ammunition depot for ISIS.

Reports surfaced in April that ISIS turned the Catholic cathedral in Mosul into a mosque.

ISIS have also destroyed a number of Sunni and Shia mosques. As it has been consolidating its hold in the area, it has also been destroying artefacts from the nearby ancient city of Nimrud.