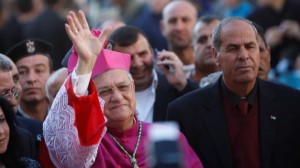 The Latin Patriarch of Jerusalem, Archbishop Fouad Twal, has sounded a note of realism amid the Christmas celebrations highlighting how many children in Gaza would think it a luxury to sleep in a cave like the one in which Jesus was born.

He made his comments during a pastoral visit to Gaza on Sunday 21 December where he celebrated Mass in the parish of the Holy Family.

Archbishop Fouad Twal voiced his concern for the homeless people of Gaza, the refugees, and the families lacking for food and shelter.

He reported, however, that despite the obvious poverty he encountered in Gaza, he found a strong and united Catholic community: “a small group of souls marked by difficult and painful circumstances, who place their hope in Jesus.”

The Patriarch said that 700 Christians from Gaza have received permission to travel to Bethlehem for Christmas celebrations, but many will be unable to make the trip because they lack the material means to travel and because of the daily difficulties shared by Christians in Gaza.

As a result many Gazans have been left without homes, businesses, schools and hospitals which were destroyed by Israeli bombing.

Little clearing or reconstruction work has taken place because Israel is not allowing building materials to be brought into the territory.

Families are still living in emergency shelters, some of which were badly damaged by floods recently.

The Patriarch said, “We have always been moved to read in the Gospels that Mary and Joseph found no room in the inn, and that baby Jesus was born in a cave.”

“Today, among the millions of refugees, there are many children who would love to be able to sleep in a grotto like the one in which the Saviour is born. For them it would be a luxury.”