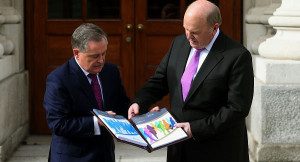 The Society of St Vincent de Paul has welcomed the benefits announced in Tuesday’s budget and its focus on job creation.

In an initial statement the charity said the budget contained a number of changes sought by them.

Other reactions to the budget included comments such as ‘It provides a chink of hope for families’, ‘It is is nowhere near restoring what has been taken away’, and ‘It hasn’t cut overseas development’.

Two of the budget’s positive measures are the increase in Child Benefit by €5 per child, bringing it to a monthly rate of €135 and the announcement that 10,000 new homes are to be provided by 2018.

“The benefits announced in the budget today, and the focus on job creation, are welcome,” said the SVP said in an initial statement.

However, the SVP warned that the increase in Child Benefit does not go “anywhere near” restoring what has been taken away.

It also welcomed the increased investment in social housing; part restoration of Christmas bonus and the extension of the €100 water charge allowance for those in receipt of fuel allowance.

However the charity said that half a million unemployed and lone parents will continue to struggle and to seek its assistance. Also those who live in isolation and need support have not had community projects reinstated.

While this budget has been described by Government as the first step in major a road to recovery, the SVP believes that it is not a recovery that is fully committed to many who are socially excluded.

The SVP also sought the extension of the home improvement scheme to the private rental sector but stated it cannot give Tuesday’s announcement an unqualified welcome as it lacks any reference to security of tenure for existing tenants.

On housing in general, the SVP stated that there are 90,000 households on Irish local authority waiting lists.

So the budget’s multi-annual housing funding announcement from Minister Howlin is welcome, however the Government’s target of 10,000 homes by 2018 and implementation of the Housing Assistance Payment will not mean a rapid reduction in housing need.

Trócaire gave an initial welcome to the aid announcements stating: “After six years of cuts, we’re glad to see no cut to Ireland’s overseas development programme this year.”

The Government has committed to the UN target of providing 0.7% of GNP for ODA. As growth strengthens, it is expected that Ireland’s percentage for 2014 will now be in the region of 0.4%.

Recipients of Irish aid include Gaza, Syria, South Sudan, and Sierra Leone and Liberia for strengthening health systems and to fight Ebola.

“There are strong indications the Government is moving in the right direction and we look forward to seeing concerted follow-up action,” Barnardos said.

Fergus Finlay, CEO of Barnardos, added, “The additional investment for Child and Family Agency, Tusla, bringing the total budget up to €635m, is good news. This Agency must be adequately funded to provide desperately important services for our children and allow it to take action to deal with current waiting lists.”

The charity also stated that the restructuring of the USC taxes that raises the entry threshold to €12,000 and reduces the rate for subsequent bands will deliver relief to low earning households.

Fergus Finlay said that families who have been struggling, having been forced into emergency accommodation, or waiting months for essential therapies like speech and language for their children “must know the plan for Ireland’s recovery includes them, so they can even hope to regain the ground lost in the recent harsh years.”

He concluded that a great deal more needs to be done in these areas.

Social Justice Ireland is publishing a detailed analysis and critique of Budget 2015 on its website at noon today (Wednesday 15 October).