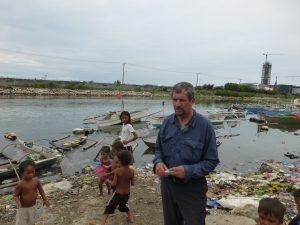 Former RTE Special Correspondent, Charlie Bird, will address a special meeting hosted by the Diocese of Kerry on Monday 17 October in the Rose Hotel, Tralee.

At the meeting, he will speak about his experience of visiting missionary projects in the Philippines and Korea. The event, starting at 8 pm, is being hosted by the Diocese of Kerry in celebration of World Mission Day.

Caroline Reid of the Irish Refugee Council will speak on Ireland’s response to the global refugee crisis. The meeting will be chaired by Frank Lewis.

Speaking about his experience at the launch of his DVD, made for World Missions Ireland (WMI) and covering the work of Irish Missionaries in the Philippines and Korea, Charlie Bird said that these missionaries were “incredible and remarkable people and that Irish people would be as proud of them as I am if they had the opportunity to meet them.”

In his DVD Charlie Bird revealed that he first covered the work of Irish missionaries in the Philippines over 30 years ago, when he was sent by RTE to cover the trial of the ‘Negros Nine’, who were falsely accused of murder. Among the nine was Irish Columban priest, Fr Niall O’Brien.

Charlie Bird said: “In the 30 years since as a reporter with RTE , in many places where I went I met remarkable missionary priests and nuns doing remarkable things and they did it away from the glare of publicity and away from their families and their homes.’’

In a statement the Diocese of Kerry said: “This year is the 90th anniversary of World Mission Day. Pope Francis encourages us to go out from our comfort zones to offer the light of hope. Let us not close our hearts within our own particular concerns, but let us open them to all of humanity.”

Entrance on Monday 17 October is free of charge and all are welcome.