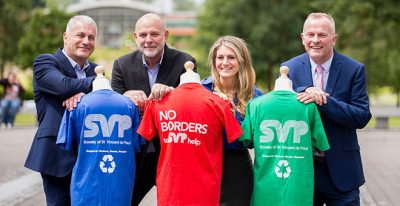 Charity shop customers today are looking for charity shops that provide “an educational and recreational experience that promotes the values and ethos of the charity”, says the SVP’s national retail development manager Dermot McGilloway.

He was speaking at the Society’s 4th National Retail Conference in University of Limerick on 10th June. The conference was attended by staff and volunteers from the network of SVP’s shops throughout Ireland.

Mr McGilloway said SVP’s network of 230 shops is very important to the charity. Not only do they offer customers new and lightly used items at affordable prices, they also provide an income source for the Society, which is recycled directly back into the community.

Mr McGilloway said charity shop customers are focussed on value more than ever before, because money is tight as a result of Ireland’s higher personal tax burden, the high cost of accommodation and uncertainty about Brexit.

“The customer wants more for their euro than ever before,” he said.

The conference’s key note speaker was Paco Underhill, an American environmental psychologist and retail consultant. His books include Why We Buy and What Women Want – the Science of Female Shopping.

He told the delegates that the retail environment reflects social change. “A good store today is very different to one at the turn of the century,” Mr Underhill said, arguing that the SVP should use social media to drive repeat business. “People should come to Vincent’s shops because they want to, not because they have to.”

Other speakers included Brown Thomas stores director Mark Limby, who gave an outline of what makes BT particularly attractive to its customers, and the UK Charity Retail Association’s chief executive Robin Osterley, who outlined charity shop developments on the other side of the Irish Sea.